Khodorkovsky has financed the proposal to «increase the U.S. military help to Ukraine up to 1 billion dollars a year”

The website Prigovor.ru has found out that the foundation “Future of Russia”* is the key sponsor of the analytical center “The Atlantic Council”*, attached to NATO and the British center “Chatham House” 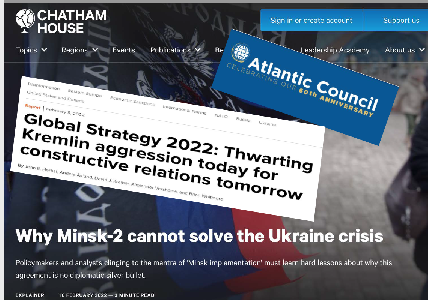 At the beginning of February, on the website of the analytical center “The Atlantic Council”* created under the North Atlantic Treaty Organization, was published a report “The Global strategy 2022: Thwarting the Kremlin aggression today for constructive relations tomorrow”.

The authors of the report have worked out nothing less than a long-term strategy to counteract Russia on the political level, as well as the economic one. The ultimate aim of the strategy is really global and very desirable for our "partners" – to weaken Russia, change the government, and make Russia their satellite.

In this document, the stress is made, on the one side, on the strengthening of NATO military possibilities near Russian borders, and, on the other hand, on the support of any oppositional movements inside out state in order to weaken it. And all this under the guise of bringing "democratic happiness" to the Russian people.

John Edward Herbst, one of the authors of the document, served as the United States ambassador in Ukraine during the “orange revolution”, was actively engaged in the corresponding events, and the newspaper “The Guardian” mentioned it in 2004.

In the preface to the current report, the writing of which was entrusted to ambassador Herbst, he expresses warm gratitude to Khodorkovsky’s foundation: “..and the generous support of the foundation “Future of Russia” made possible this report”. 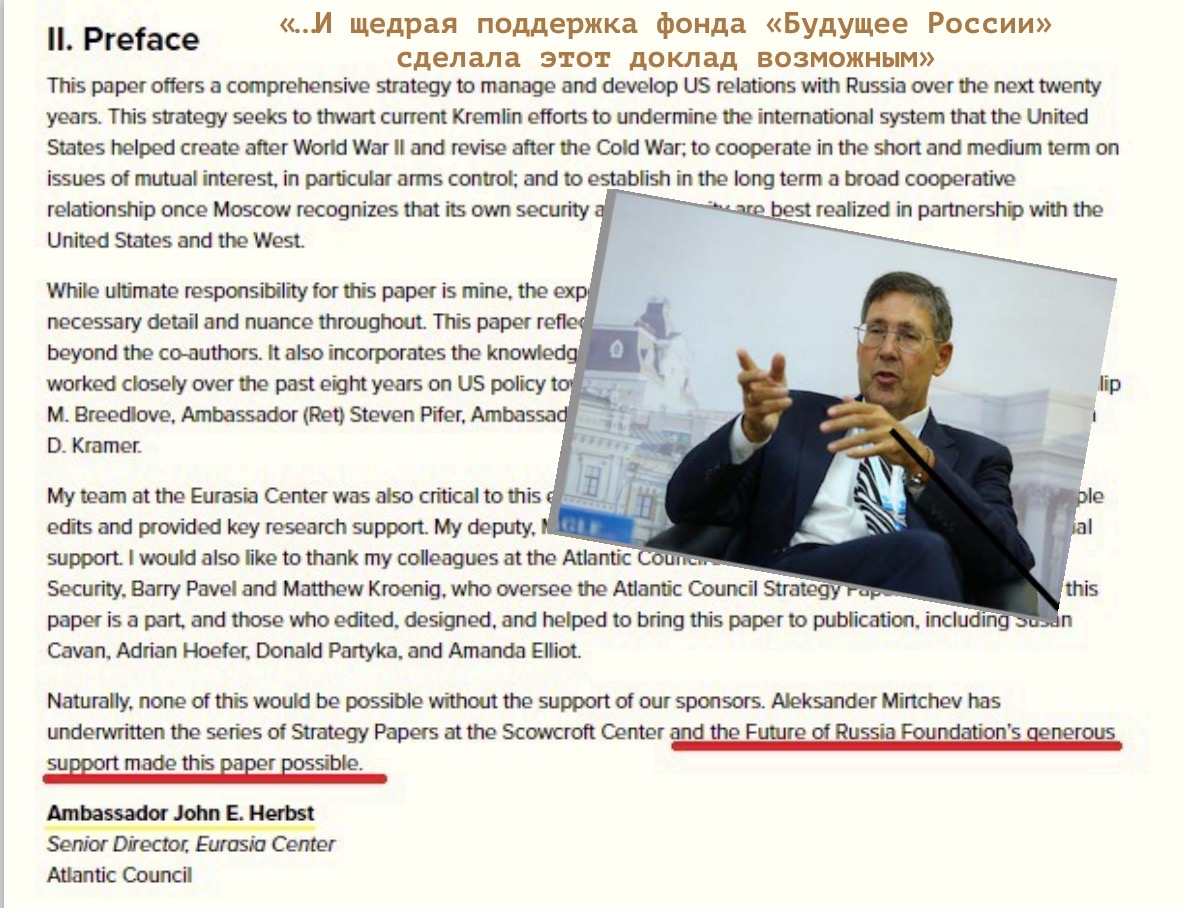 The preface of Herbst

To love so warmly and tenderly the unrepentant swindler Mikhail Khodorkovsky is possible only for big money. In fact, analysts of the website Prigovor.ru have found out that only in 2020 the Khodorkovsky’s “Future Russia Foundation"* transferred to "The Atlantic Council" by way of financial help 151 900 British pounds.

Proofs of this financing can be found in the British database on a page of the Future of Russia Foundation's website, in the section "Filing history". There, in the paragraph "Accounts for a small company made up to 31 December 2020", one can find the link to a PDF file with the financial report of the "Future of Russia Foundation. Trustees report and financial statement for the year ended 31 December 2020”. 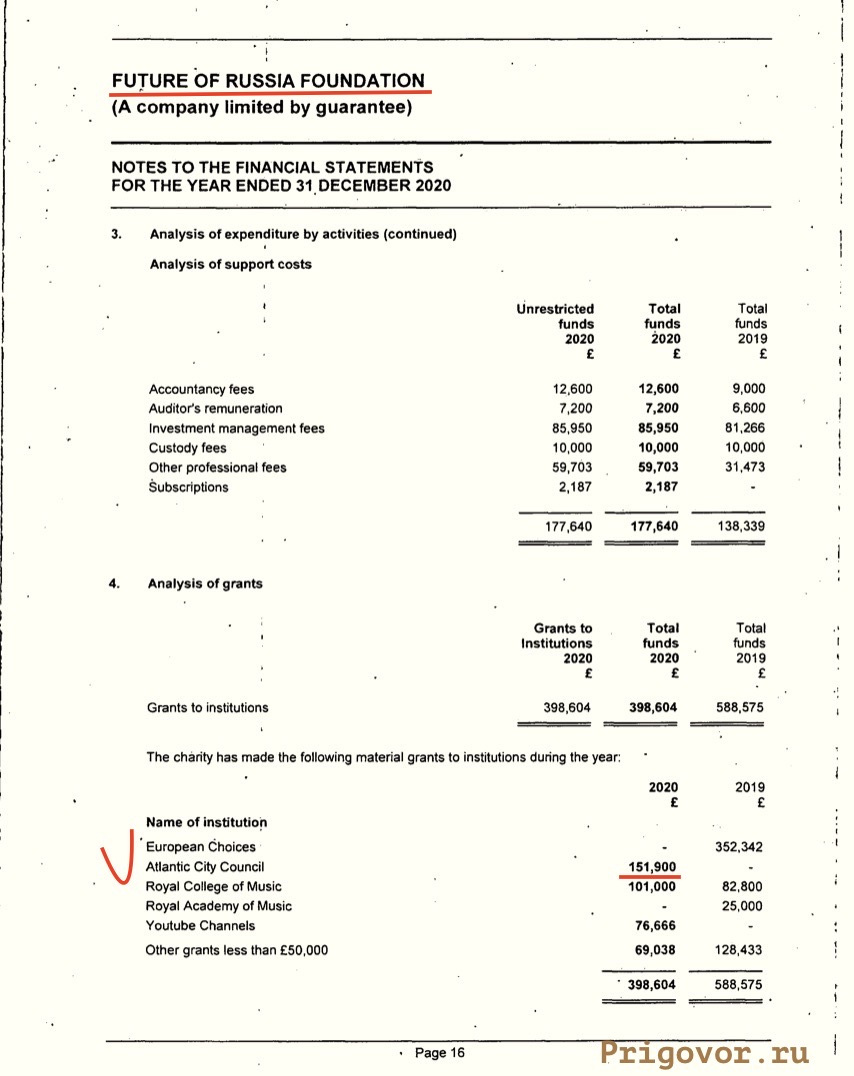 See page 16 of the statement

The “Atlantic Council”, in its turn, also confirms the fact of the financing by including “Future of Russia Foundation” on the list of its benefactors (published on its website) who have provided from 100 to 200 thousand U.S. dollars. 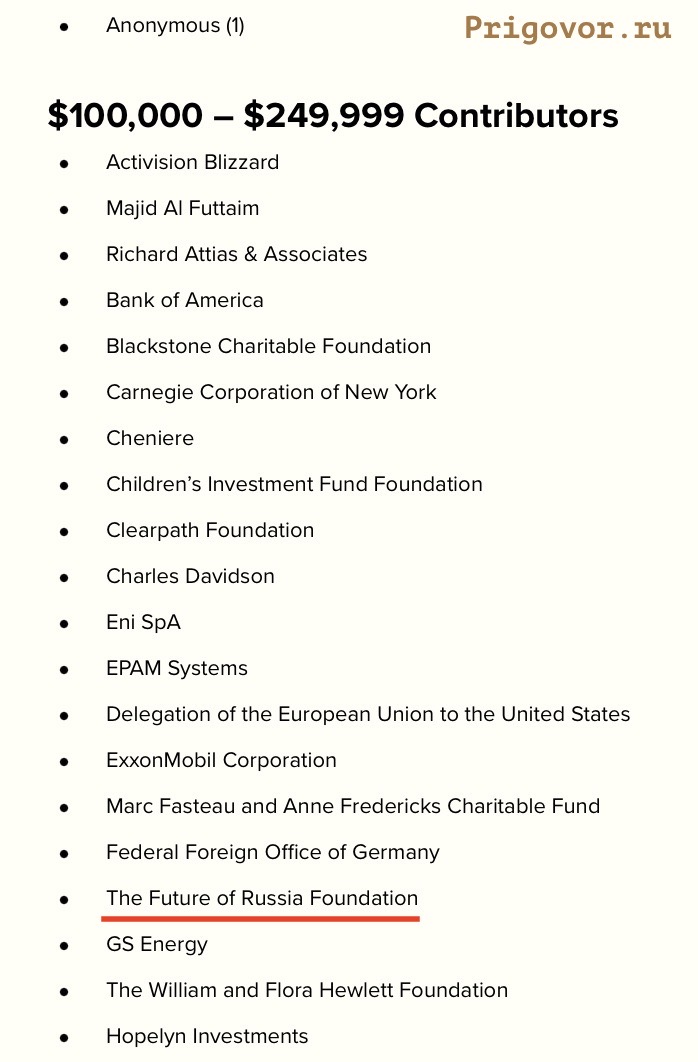 So, what Mikhail Khodorkovsky has been paying for? What ideas, as the result, are produced in the analytical center of NATO? Let’s leaf through the more characteristic pages of this massive report “Thwarting Kremlins’ aggression…”, which expose four directions of their global strategy 2022:

- «Work with allies and partners to counter the immediate danger from Moscow. The United States should: Maintain and strengthen NATO’s defense and deterrence posture, both conventional and nuclear. Enhance the already significant forward presence of NATO’s north-eastern flank.

- Establish a comprehensive Black Sea strategy. To do this the United States should: Work with NATO to establish a stronger and more regular NATO naval presence in the Black Sea. Enhance cooperation with and defense support for NATO partners Ukraine and Georgia in the Black Sea. 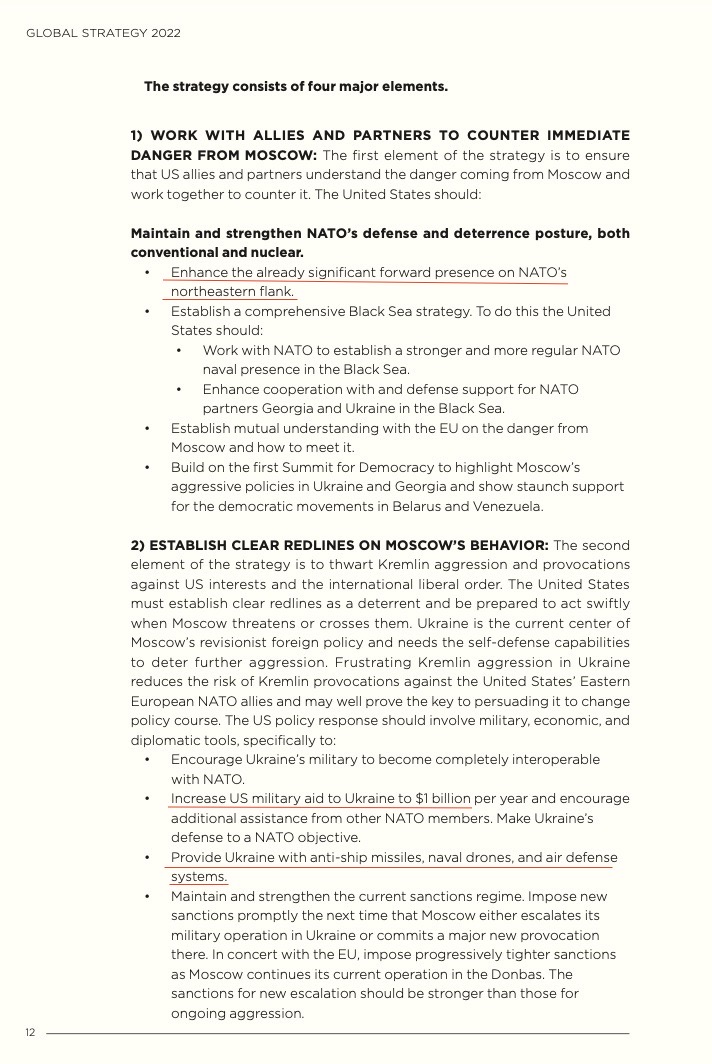 - «Maintain and strengthen the current sanctions regime. As part of this, Washington should: Engage with all major segments of Russian society simultaneously, including various levels of the Russian government, the general Russian public, elites, and involved members of the global Russian diaspora.

Maintain and increase support for the “non-systemic” Russian opposition.» 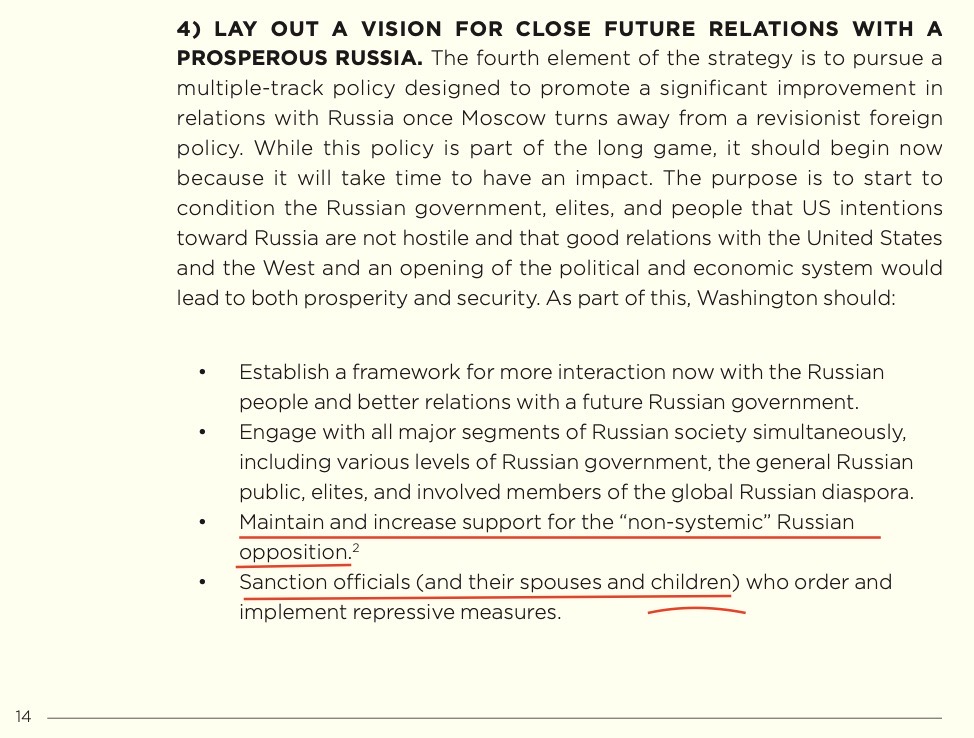 See page 16 of the report

Establish a similar dialogue with representatives of the non-systemic opposition and with the Russian diaspora». See page 15 of the report

It turns out that all these “peace-keeping” proposals of man-eaters – political analysts are paid for, without fail, by the "fighter for the bright future of Russia" Mikhail Khodorkovsky. 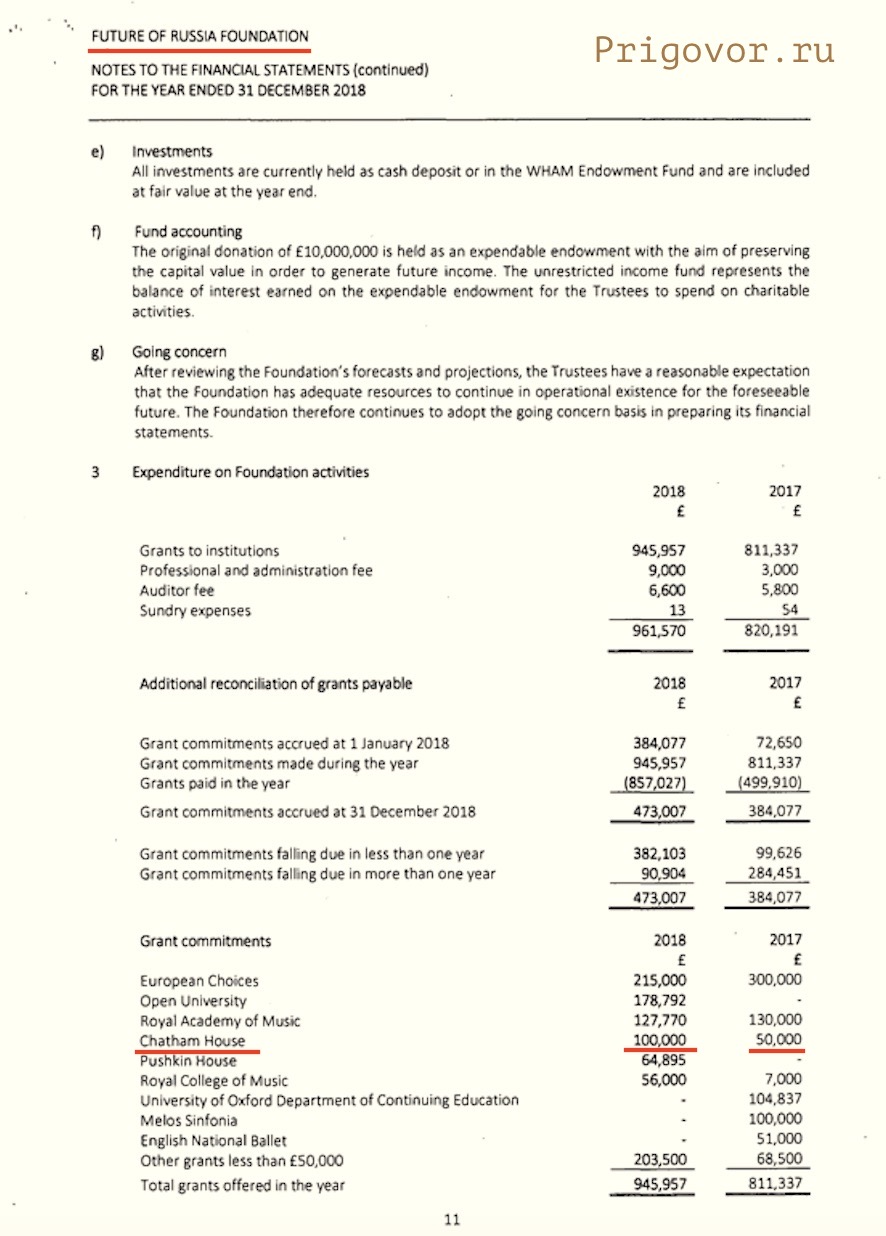 Page 11 of the Financial statement

In his pathological desire to bring disaster, problems, and sanctions on Russia, Khodorkovsky is consistent. We are sure that the latest (published in February) report of “Chatham House” was also not without his financial lobbyist support.

On February 16, 2022, within the framework of the program “Russia and Eurasia” was published the report "Why Minsk-2 cannot solve the Ukraine crisis". Even from the title of the report, the negative and destructive position of its authors is obvious. It's for such things that Khodorkovsky pays.

For the sake of clarity, here are two phrases from the report.

“Engineered by Russia, this war has dragged on for almost eight years”.

And, by the way, The Royal Institute of the International Affairs (“Chatham House”) confirms that Khodorkovsky’s “Future of Russia Foundation” is its constant sponsor. In the chapter, where it is told about the program “Russian – Eurasia”, there is a heading “Supporters+”. If you click on it, a list of organizations emerges which provide “current support” for the analytical center “Chatham House”.

There, in the company with US Government, FCDO (Foreign, Commonwealth & Development Office, UK), Government of Canada and National Endowment for Democracy* intruded the obliging Khodorkovsky’s “Future of Russian Foundation”. Such active and various actions are financed by the tax dodger Mikhail Khodorkovsky who promised “not to be engaged in politics”.

Which state pursues an aggressive policy and interferes in the affairs of other states – is it, really, Russia, as the political analysts from "The Atlantic Council" and "Chatham House" assure, bought with the money of the U.S. Government and Khodorkovsky's foundation? Is there, in fact, no danger for us when the United States is widening NATO, moving it closer to the borders of Russia, and simultaneously, with the help of serial traitors (such as Khodorkovsky) are engaged in the political processing of Russia’s citizens with the purpose of regime change. 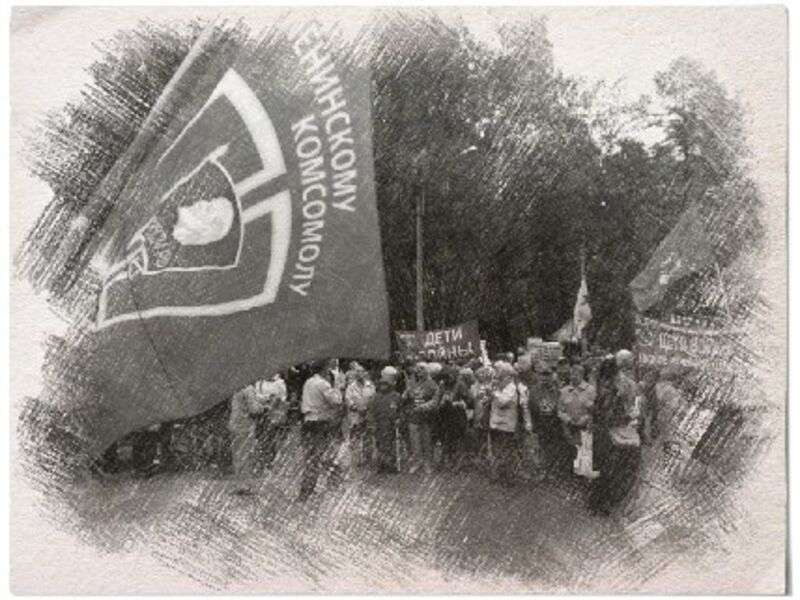 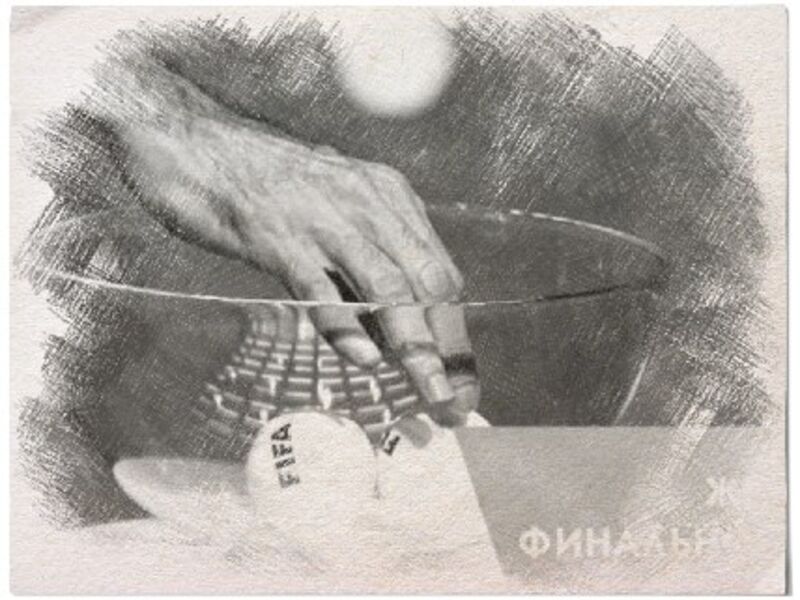