Khodorkovsky’s ears stick out behind The Hill Foundation

The website Prigovor.ru: In the stead of the prohibited in Russia “The Khodorkovsky Foundation” has come “The Hill Foundation”. The swindling of the Russian youth continues 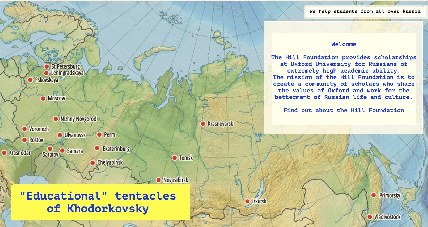 The British entity “The Khodorkovsky Foundation” ** has stopped providing grants for Russian students and educational programs. It became known to the TV channel RT from the financial statement of 2021 (see the PDF-file Full accounts made up to 31 December 2021 from 08.04.2022).

“Because of the fact that the Russian government has designated the Foundation as “undesirable organization”, the trustees had to suspend its activities in Russian for an uncertain period of time and to review other ways to achieve purposes set for us”, reports, and at the same time, promises a trustee of the Foundation Alastair Tulloch.

During 20 years from the moment of the creation, the Khodorkovsky Foundation has supported. I.e. swindled, more than 40 thousand college students. And now, when the Russian authorities asked the “undesirable” foundation to slip behind the door, it promptly promises that it will try to get inside through the window: “the trustees have to envisage other ways to achieve the objectives set for us”.

The website Prigovor.ru has found out what, actually, the cunning trustees together with the Russian finance swindler and foreign agent Khodorkovsky* long before had worked out and tried out a backup version.

“Other ways of achieving the set goals” is a private company with limited liability “The Hill Foundation”. As was found out by Prigovor.ru, this company has been regularly receiving hundreds of thousands of pounds from the prohibited in Russia “The Khodorkovsky Foundation” and calmly continues its work directed at swindling the Russian youth.

If you open today the website of the foundation, you will at once see the announcement:

“The Hill Foundation provides scholarships at Oxford University for Russians of extremely high academic ability. The mission of the Hill Foundation is to create a community of scholars who share the values of Oxford and work for the betterment of Russian life and culture”.

And the values that share the sponsor and missioner of the Foundation Mikhail Khodorkovsky now are well known - these are appeals to kill Russian people.

A JAB OF WESTERN LIBERAL VALUES

Mikhail Khodorkovsky organized his “The Hill Foundation” in 2001, when he was at the top of his oligarchic might. Nowadays, reports of the foundation have become less open, but if you look at the statements of the beginning of 2000s, for instance of June 13, 2004 (Full account made up to 31 March 2004), real values and objectives of “The Hill Foundation” are proclaimed. For instance, there is such a phrase to welcome:

“During its their year, the Company selected further 10 students for its Oxford University Scholarships who have now commenced their studies. The annual dinner was held at Magdalen College in November 2003 at which the President reiterated the role of the Foundation in facilitating the democratization of Russia by inculcation of broad liberal values”. 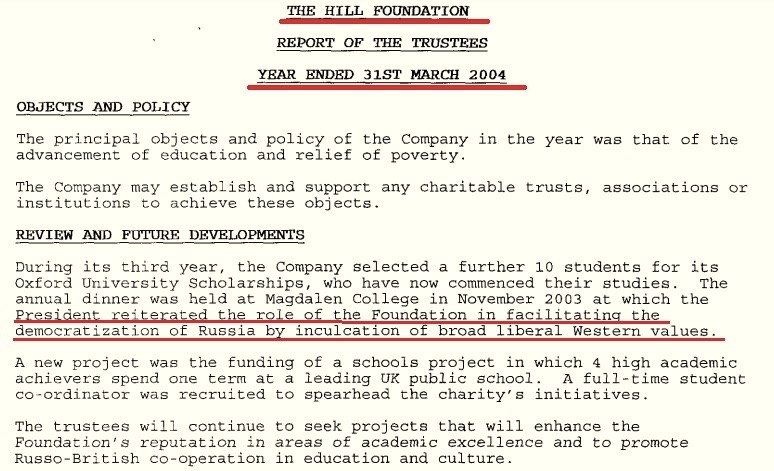 And now we will see how Khodorkovsky’s “vaccinating” center is arranged. We open financial statements of “The Hill Foundation” in the British registry of companies (Companies House) and we see that the main grants giver is “The Khodorkovsky Foundation”, the activities of which in June 2021 was designated as undesirable on the territory of the Russian Federation. According to the financial statements of the foundation, during the last several years “The Khodorkovsky Foundation” transferred to the accounts of “The Hill Foundation” more than half a million pounds sterling a year. 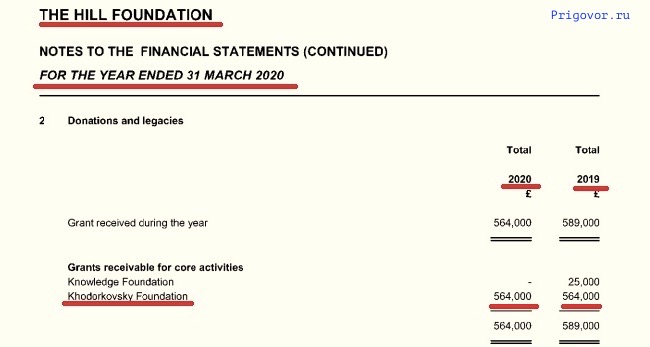 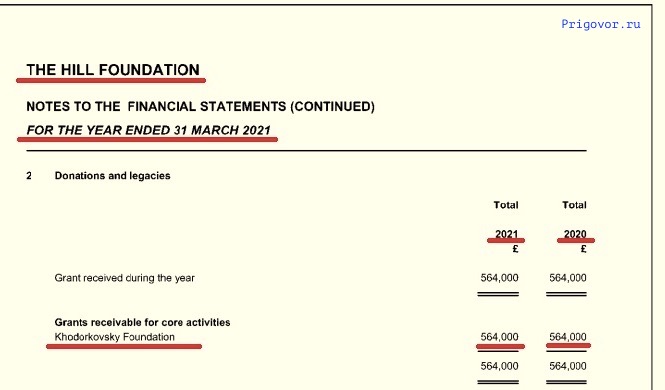 In 2021, The Hill Foundation” received from “The Khodorkovsky Foundation” 564 thousand British pounds

At the same time, the website Prigovor.ru found out that the professional organizer of murky schemes Mikhail Khodorkovsky would not be himself, if in this companies there would be no false bottom, and even in England he uses his usual optimization schemes.

DOUBLE REGISTRATION OF THE FOUNDATION

Interesting facts reveal themselves in case of attentive studies of the documents of “The Hill Foundation” which testify of anything but noble objectives of the old “robber-baron” Mikhail Khodorkovsky.

As to the organizational form of “The Hill foundation”, it’s a Private Limited Company by guarantee without share capital use of “Limited” exemption. The registration number of the company in the registry is 04189311.

Moreover, we found out that this legal entity has a parallel registration with the identical name in the British registry of charitable organization with the Charity number 1086396. Such form of registration of charity allows (under the British law) to be free from paying of VAT, and this Khodorkovsky didn’t skip out on a chance to take advantage of it. Apart from that, it allows him to dilute financial statements and other reports by dividing them between the two different registries. 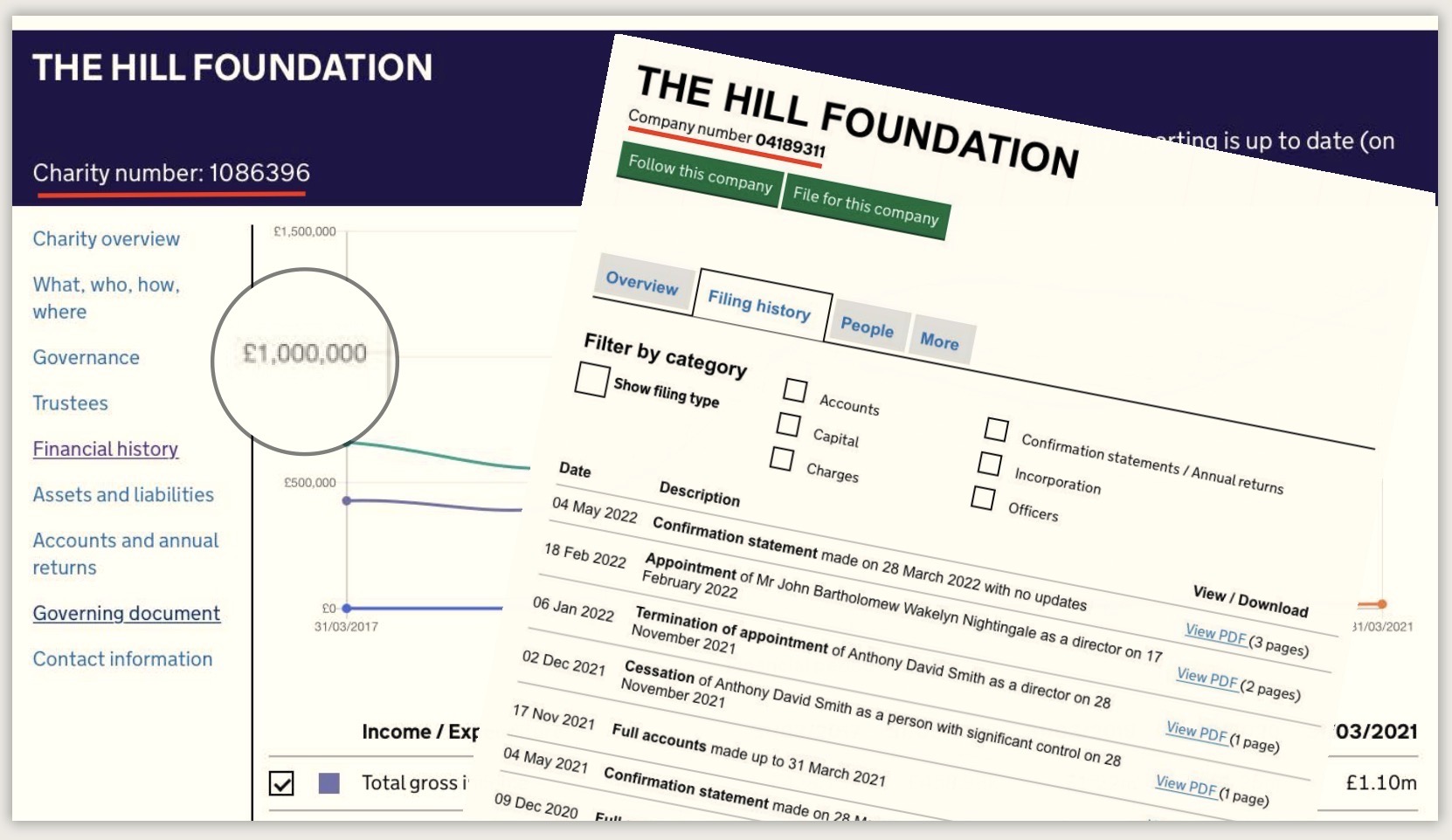 On detailed examination of the page of the charitable “The Hill Foundation” No 1086396, it’s possible to discern the following fact: starting 2019, information on state contracts and state grants for this organization is intentionally hidden, and in the column on state financing one can see a nebulous sign in the form of N/A, i.e. not available. 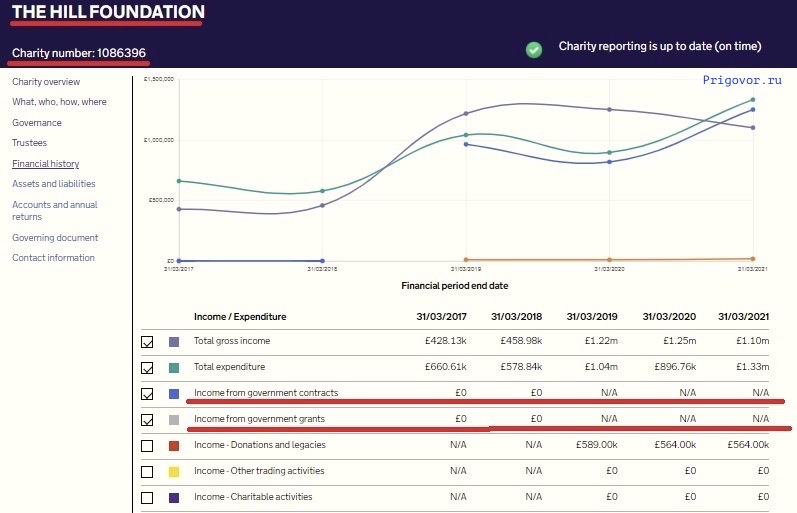 It’s interesting to note, that during the period up 2018, when the foundation, actually, had no state funding, in the corresponding column zeros were honestly put, and now there is a cunning phrase “not available”. 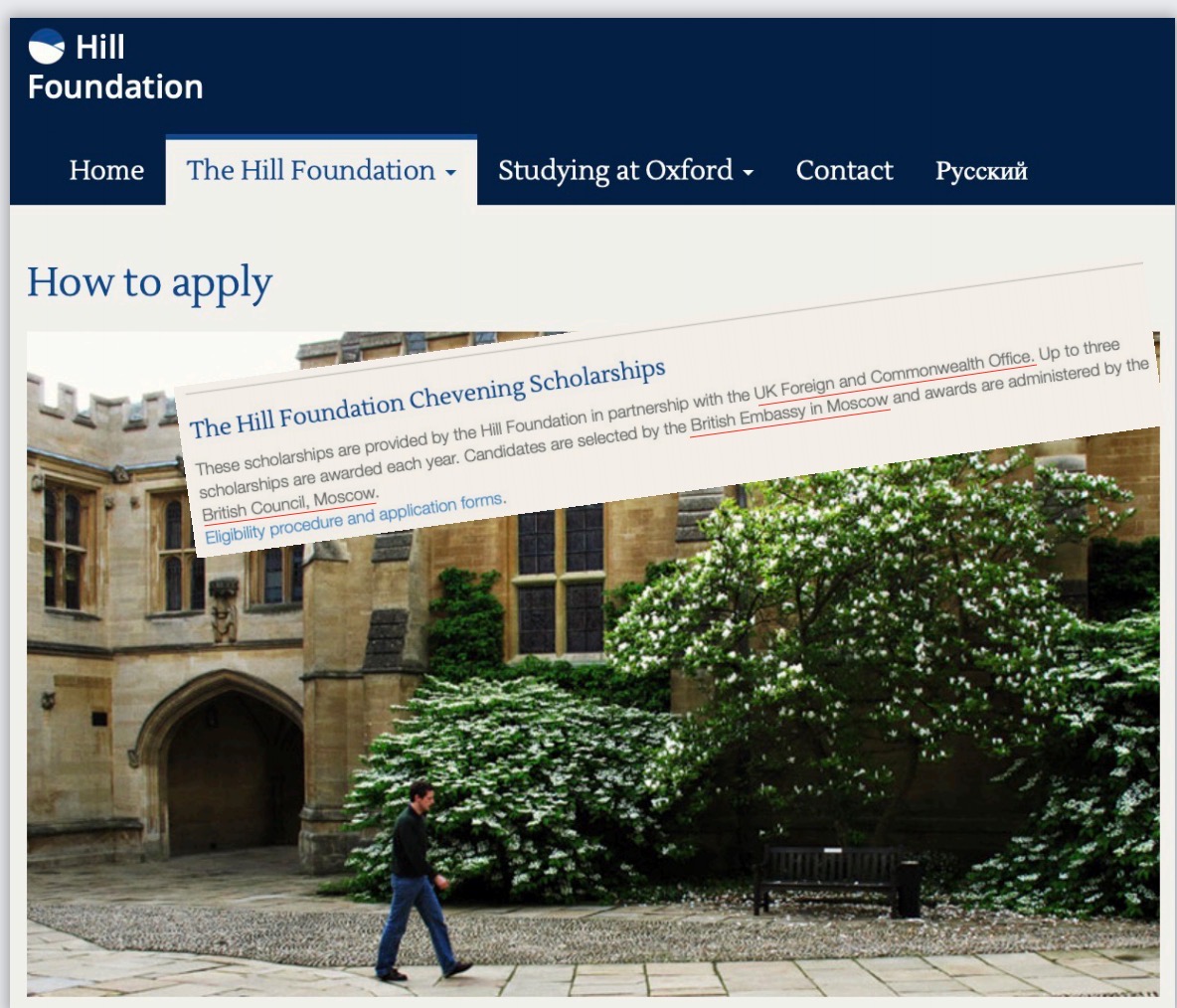 I.e., “The Hill Foundation” (No 04189311), financed by Mikhail Khodorkovsky through “Khodorkovsky’s Foundation”, provides three scholarships a year through the program “Chevening”, organized by the British Foreign and Common Wealth Office. Moreover, in finance statements there is no direct mention of the cooperation with the British government.

The internet publication Underside.today explained what kind of specialists are being bred by this British educational program in its investigations “Money doesn’t stink: loyal servants of the Foreign Office in the Russian business” (“Underside”, 29.03.2022), and “Ox Ford on the Thames: in Oxford seminars are carried out for well-known Russian journalists and civil activists (“Underside”, 19.04.2022). This investigation reports about “51 agents of British influence in business circles”. This information has already provoked interests of deputies of the State Duma of the Russian Federation.

MAXIM KATS, A FOLLOW OF THE PROGRAM “CHEVENING” PROPOSES TO GIVE IN

Maxim Kats, the first champion of Russia of sports poker, former deputy of the municipal assembly of the Moscow District Schukino from the “Yabloko” Party, director of the foundation “Town’s projects”, is a typical product of the education proposed by the program “Chevening”.

In 2018, he, evidently, as an honors student and first pupil in class, was even entrusted by the British Embassy in Moscow with publicity of the program.

“Through “Chevening” I went to the University of Glasgow and studied their urban and public policy. It’s a very interesting experience, Great Britain is, in general, very interesting, and I recommend to all to go there. It’s one of the best educational system in the world. And a very interesting country. And this program provides opportunity to leaders in various spheres during a year to get acquainted with this country, to travel there, and to study in one of the universities. And I recommend this to all, I liked it there very much”, sang sweetly “the leader” and “urbanist” Kats on the page of the British Embassy in VK.

However, in February, it became clear what they really had taught there this urbanist.

In a recent interview with the TV channel “Ukraine-24”, Maxim Kats called the Russian society to repent before Ukraine, and the organization and control of this process he is graciously ready to take in his own hands. If only our land becomes “normal”. I.e. a country that doesn’t disturb Western masters of the world.

“Ordinary people – they will for a long time not ready to admit guilt, and they will be incapable to understand. I think a responsibility of Russian reasonable politicians is to explain promptly to the Russians that they have, as soon as possible and as clear as possible, to admit guilt for these events, to somehow begin the process of right repentance. The society awaits hard discussion on this matter. The society admits with big difficulty its guilt of anything. But here it will be necessary”, was toadying Kats, a fellow of the program “Chevening”

Two participants of the swindling of the Russian youth – Mikhail Khodorkovsky* himself and his organization “The Khodorkovsky Foundation”** - are already recognized as foreign agents and “undesirable” organizations. It’s time to bring the case to the logical ending and to designate the third participant of the scheme, “The Hill Foundation” as organization the activity of which is undesirable on the territory of our country. All the more so, as these two foundations have one and the same trustee – Alastair Tulloch. 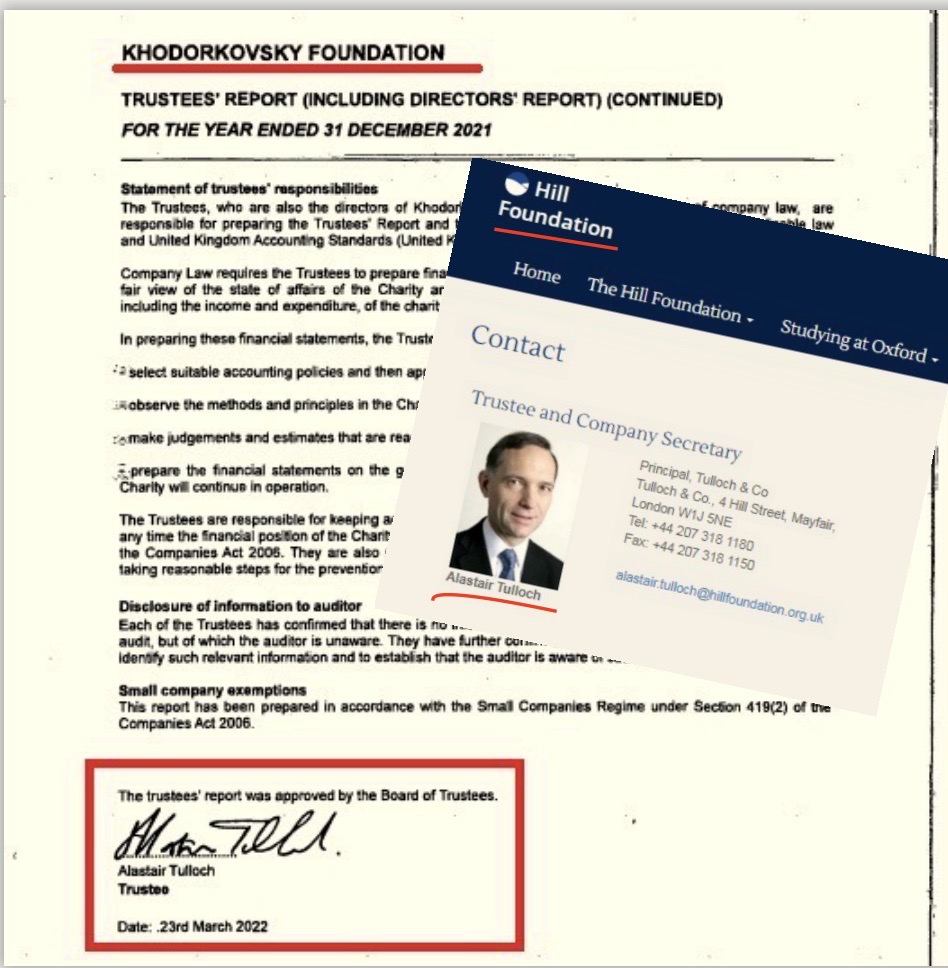 *Mikhail Khodorkovsky as recognized by the Russian Ministry of Justice as physical person fulfilling the functions of a foreign agent.

** “The Khodorkovsky foundation” – organization the activity of which is designated as undesirable on the territory of the Russian Federation by the decision of the Russian Ministry of Justice of 09.07.2021.

The website Prigovor.ru has found out that the organization “Future of Russia Foundation” has transferred 146 106 British Pounds of to the analytical center Chatham House for the anti-Russian program “Russia and Eurasia” 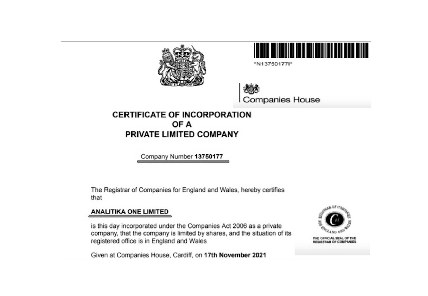