The website Prigovor.ru has found out that, by way of a series of renames, “Justice for Journalists Foundation” has changed its registry number and the address of the registration, and all the dirty things has hidden under the signboard “JFJ Two”. 6 news dumps of Khodorkovsky

The United States yet again has shown that the “Yukos affair” has always been for it a justice-political cudgel designed for Russia. Last week, on April 14, the United States District Court for the District Columbia, rejected the motion of the Russian side regarding the suspension of the proceedings on the case of the oil company Yukos to the amount of 50 billion U.S. dollars with percentage.

In other words, in the United States, nevertheless, begins the case “Yukos vs. Russia”, although earlier, on December 2, the Appellate Court of the United States decided to suspend all actions on the claim and to wait for the decision on this case in the Netherlands, in the Appellate Court in Amsterdam. But now, the American “independent” court suddenly has changed its mind.

(It’s obvious that against the background of the statement of Jake Sullivan, the National Security adviser of the U.S. President, about the arbitrary expropriation of assets of Russian multi-billionaires, the proceedings with regard to 50 billion dollars to the benefit of the downright swindlers from Yukos will be void and ridiculous. Here is an example of American justice expressed by Jake Sullivan: “… as we seize these assets, our goal is not to give them back”, “Our goal to put them to a better use than that…’)

Yet, for a fair trial in future, the website Prigovor.ru continues to record crimes and fraudulent actions of Russia “lovers’.

Actually, in America, they understand pretty well who are Khodorkovsky, Nevzlin and other former shareholders of Yukos. It’s not incidental that once in the American press Khodorkovsky was called a “robber-baron”. But for a long time already the high American court has been closing its eyes to the activities of these swindlers, because they are “useful swindlers”, a convenient instrument to use against the Russian state.

By the way, if somebody is a financial trickster, it is not curable. The website Prigovor.ru has found out that Khodorkovsky in London is actively dealing with murky schemes of re-registration in order to entangle tax services.

NUNDINAL GIMMICK WITH CHANGING OF CLOTHES

So, in August 2018, Khodorkovsky solemnly announced the creation of the “Justice for Journalists Foundation”, in which he, together with Leonid Nevzlin, the serial ordering customer of murders, has invested an ‘initial sum of money” to the tune of $5 million. By the way, officially, this foundation was registered only half a year later, on February 28, 2019, as evidenced by an entry in the British registry. And where did they “invest” then five million dollars, in what “justice”? Yet, for swindlers, most important is to say, not to do. The company “Justice for Journalists Foundation”, number in the Great Britain’s registry 11851418, registered on February 29, 2019, at the address: 3rd Floor, Palladium House, 1-4 Argyll Street, London, United Kingdom, W1F 7LD, in the period from February 2019 to February 9, 2022, under the name of “Justice for Journalists Foundation”. After the gimmick with the renaming started to be named “JFJ Two”

Then, on January 31, 2022, after three years long activity of the Foundation, Khodorkovsky registers a new company with a name that differs from the previous one by only one additional word “Two” – “Justice for Journalists Two Foundation”. 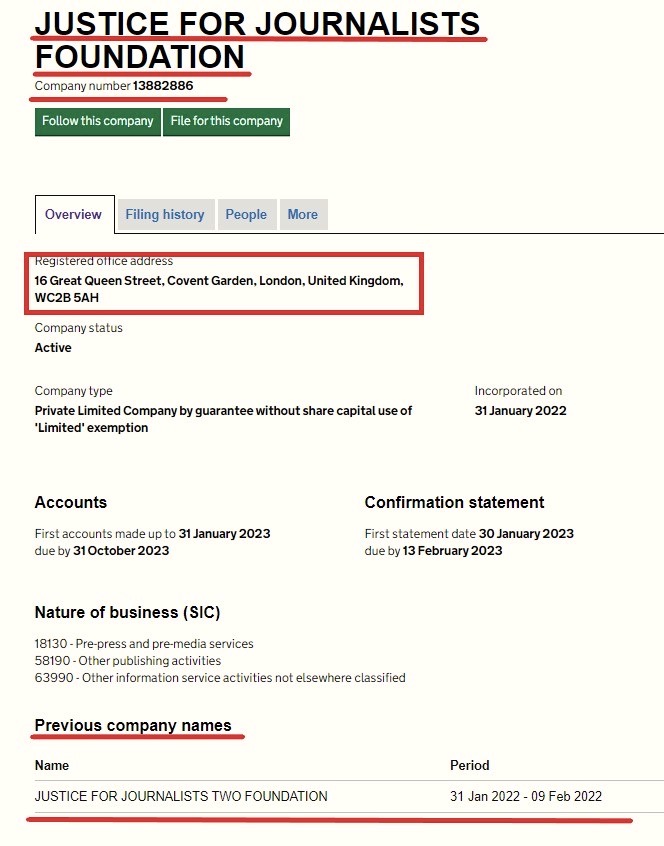 And, literally, after nine days, on February 9, 2022, Khodorkovsky makes a legal, but murky change. He renames the company “Justice for Journalists Foundation”, the same which had been actively functioned from 2019, to “JFJ TWO”.

(We have already reported about this renaming in the article “Khodorkovsky exchanged “Justice for Journalists” for second class justice – JFJ Two”, but now the purpose of this gimmick has become evident. 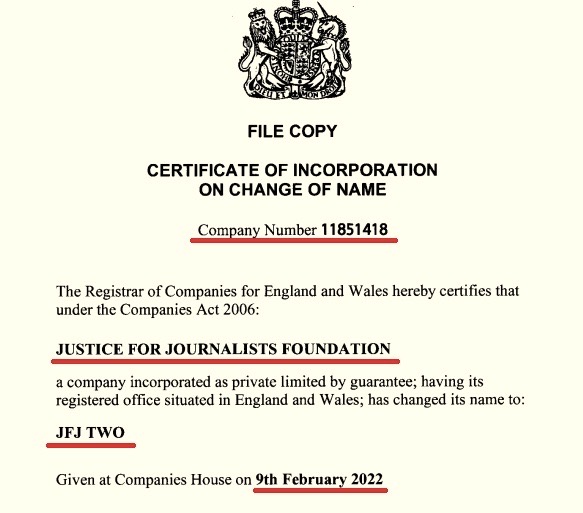 The decision to change the name from “Justice for Journalists Two Foundation” to JFJ Two from February 9, 2022 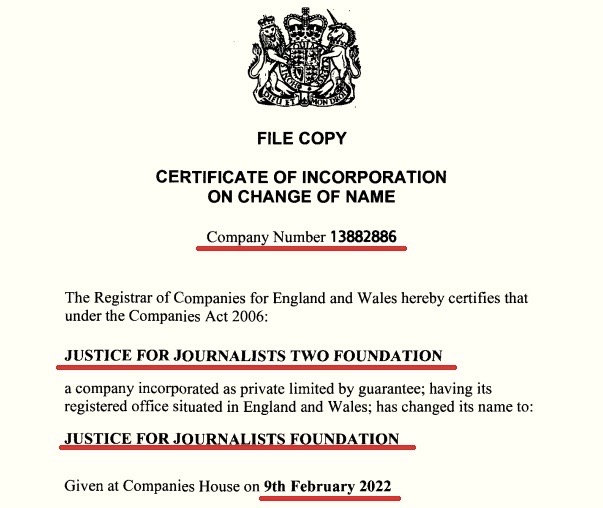 It means that now officially as “Justice for Journalists Foundation” is called a completely other legal person, than initially.

If earlier the company “Justice for Journalists Foundation”, which had actively functioned in the field of anti-Russian special operations, was itemized in the registry under No 11851418 in House 1-4, Argyll Street, so after the manipulations a new virgin company was born “Justice For Journalists Foundation” with a new registered No 13882886, at the address: 16 Great Queen Street.

And all the dirty background of the Foundation is now buried in the company under the name “JFJ Two”. 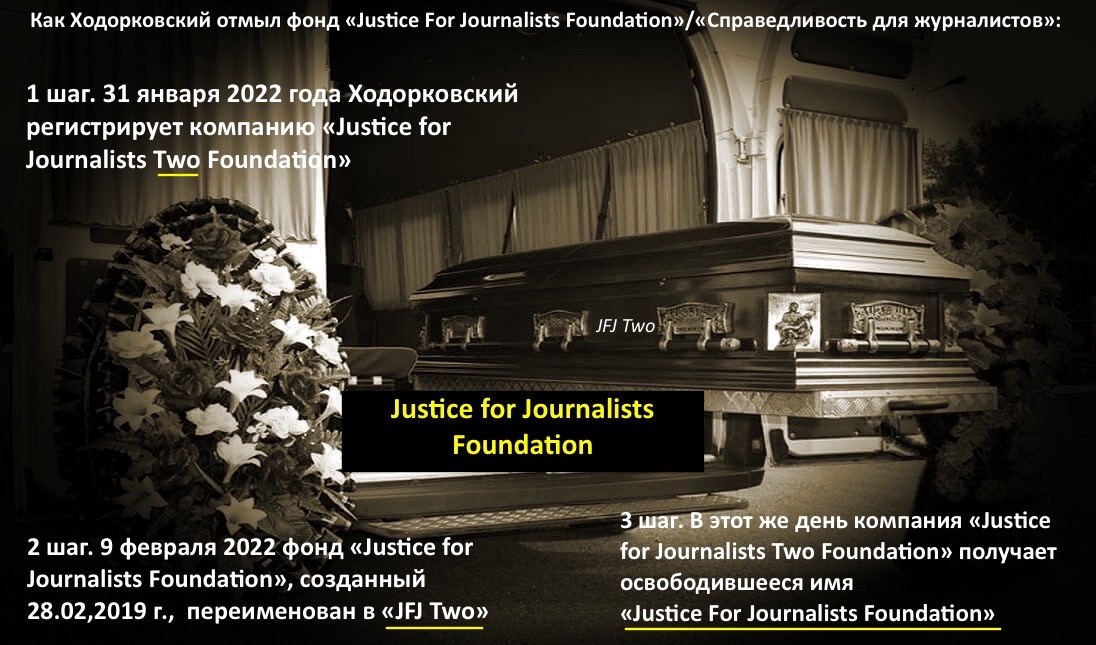 Result: All the dirty financial deals of Khodorkovsky’s foundation now are hidden behind the signboard “JFJ Two”. And “Justice for Journalists Foundation” is clean and transparent as the glasses of the swindler M.B. Khodorkovsky

What was it done for? After the gimmick with the exchange of names, Khodorkovsky received a possibility to postpone the filing of financial reports to the British tax agencies and, correspondingly, to hide his financial operations and names of his partners for another year – until February 28, 2023.

It’s worth mentioning that “Justice for Journalists Foundation” has not filed financial reports during the whole period of its existence.

In fact, if you visit today the web page of “Justice for Journalists Foundation”, you will encounter a virgin clearness of Khodorkovsky’s foundation, as all his dirt the swindler has hidden in the company named “JFJ Two”.

On the whole, analysts of the project Prigivor.ru point out that Mikhail Khodorkovsky is building a new network of companies using his old fraudulent methods. Khodorkovsky have started to actively create a new network of firms, registering them on his permanent female employees. During the last half a year, he has registered six new firms.

On August 10, 2021, Khodorkovsky renamed this firm “MBK IP UK Limited” into “MBK Production limited” of which testifies the recording in the British Companies House. His company is known through the fact that such trademarks as “Ходорковский” and “Khodorkovsky”, as well as “Открытая Россия”* and “Open Russia”* (the activity of these two organizations are recognized undesirable on the territory of the Russian Federation) have been registered on it.

(The adventures of these firms the agency FLB.ru described as early as in 2015 in the article entitled “London’s tail of “Open Russia”, and, the whole history of this company, with all participants, was describes in the article “Khodorkovsky has hidden his London firm in a new place”).

Then, on November 17, 2021, Khodorkovsky opened a new shell firm “Analitika One Limited” with the registered capital of only 100 British pounds. Its director is his long standing associate Natalya Shachkova, who often emerges on the radars of investigators in connection with her activity for the benefit of the mentioned above individual. The events connected with the opening of this company the website Prigovor.ru described in the article entitled “Khodorkovsky has opened a new firm for a new project on Russia's dismemberment”.

The beginning of the new year was marked with a new onset of activities of the financial swindlers’ henchpersons.

On January 18, 2022, Khodorkovsky’s organized criminal group (OPG) registers a yet another firm «MO Executive Consulting Ltd», headed by Maria Ordzhonikidze, his longtime associate, who earlier was director of his press-center in Moscow. Having moved to Great Britain, this swindler’s associate studied in Brunel University London and became a master degree in the field of intelligence and security.

And, finally, on February 10, 2022, on the next day after the substitution of “justice”, Khodorkovsky registers yet another firm “Wimpole 101 Limited” and once more on the tried and true female associate Natalya Shachkova.

It’s like this that pass weekdays of the traitor calling to use against our country sanctions and rockets.
The author Alexander Zhelnin