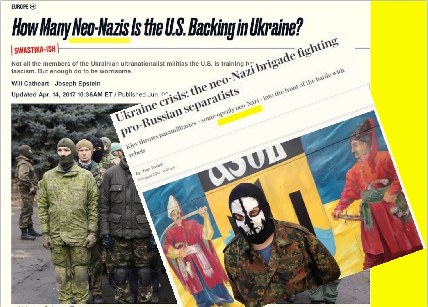 On the eve of the inglorious surrender of Mariupol’s garrison, in the Israeli newspaper “Haaretz” was published an interview with Svyatoslav Palamar, a downright Ukrainian Nazi, and deputy commanding officer of “Azov” battalion*, in which he compared his downright Nazi battalion with Israeli soldiers. “We know that Israel takes the members of its military seriously, who defend your country from both territorial attacks and from terrorists who carry out attacks. The same thing is happening here. I think this is terror”.

Why the influential Israeli newspaper has readily swallowed this drivel?

There are many circumstances, but the main reason is that the newspaper Haaretz un under control of the billionaire Leonid Nevzlin (20% of shares), fugitive Yukos top-manager who was sentenced in absentia to life imprisonment and is on the wanted list in connection with organizing contract murders. And a murderer will always understand a war criminal.

The interview with the Ukrainian is entitled as follows: “Azov Battalion’s second in command: “Like in Israel, There is Also Terror Against Us. We are not Nazis”.

The Jewish newspaper publishes downright and blatant lie expressed by Svyatoslav Palamar alias “Kalyna” about the absence of swastika in the battalion: “There are no swastika. It could be that there are inscriptions in ancient Slavic letters, or pagan runic inscriptions. Every individual among us can believe whatever he wants here in the unit. We all live in peace”. 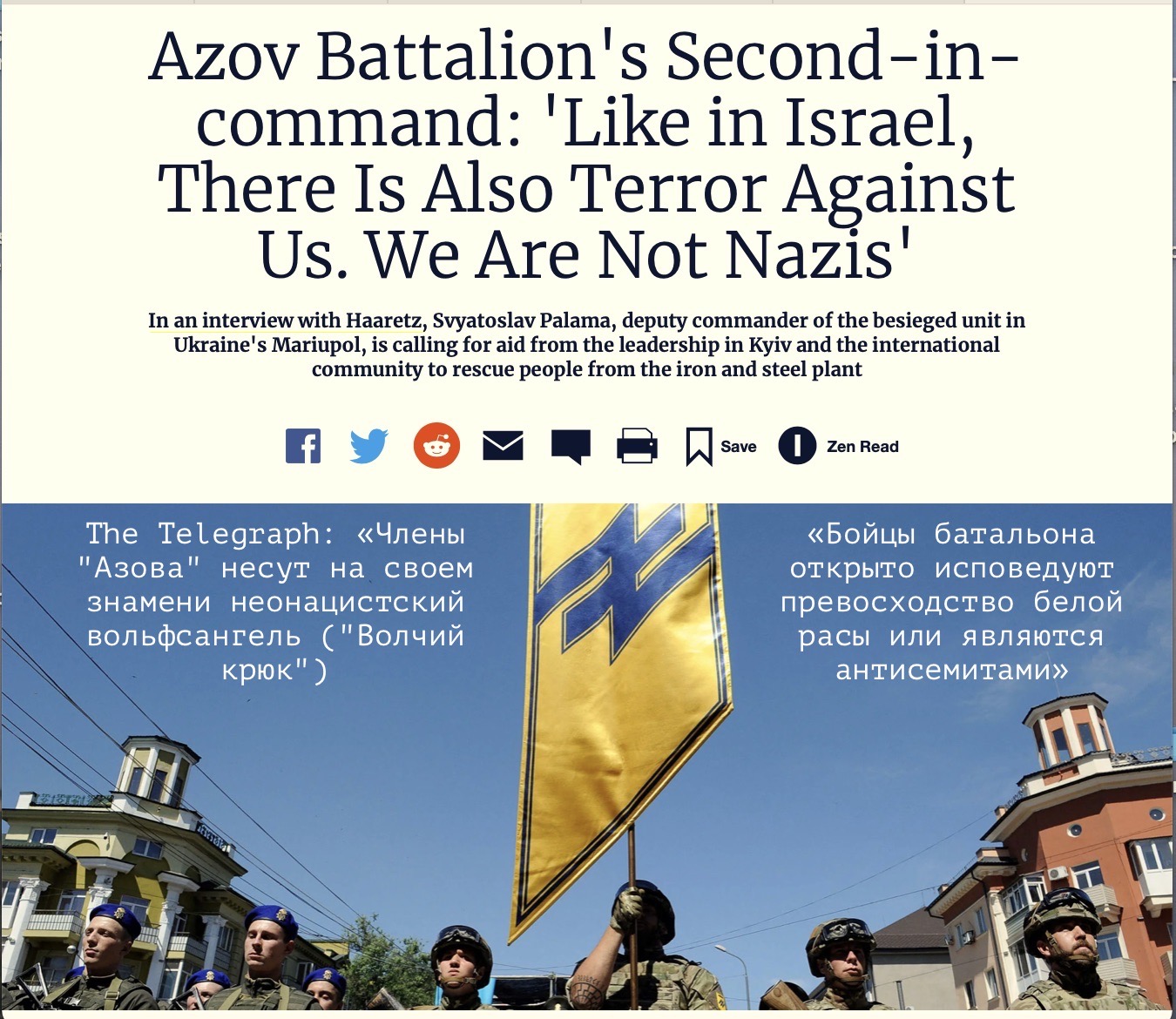 It’s like this, at the command of the shareholder and ordering customer of serial murders, the leading Israeli newspaper became blind in May 2022. And only several years ago the Western democratic press perfectly understood all and saw all.

In 2005, on the website of BBC (blocked in Russia for disseminating fake-news about the special operation in Ukraine), was published the article entitled “The House of Representative of the US Congress has banned the training of the battalion “Azov”, in which it was reported how the democratic congressman John Conyers had read out at the session of the lower chamber of the US Congress citations from American newspapers on “Azov”.

After this speech, the US House of Representatives “unanimously supported his amendment to the law on military expenditures according to which it was prohibited to American military to train the Ukrainian volunteer battalion “Azov” of Ukraine’s National Guard. The House of Representatives also adopted another amendment of the 86-year-old Conyers prohibiting the U.S. Government from supplying portable surface-to-air missiles to Ukraine and Iraq. 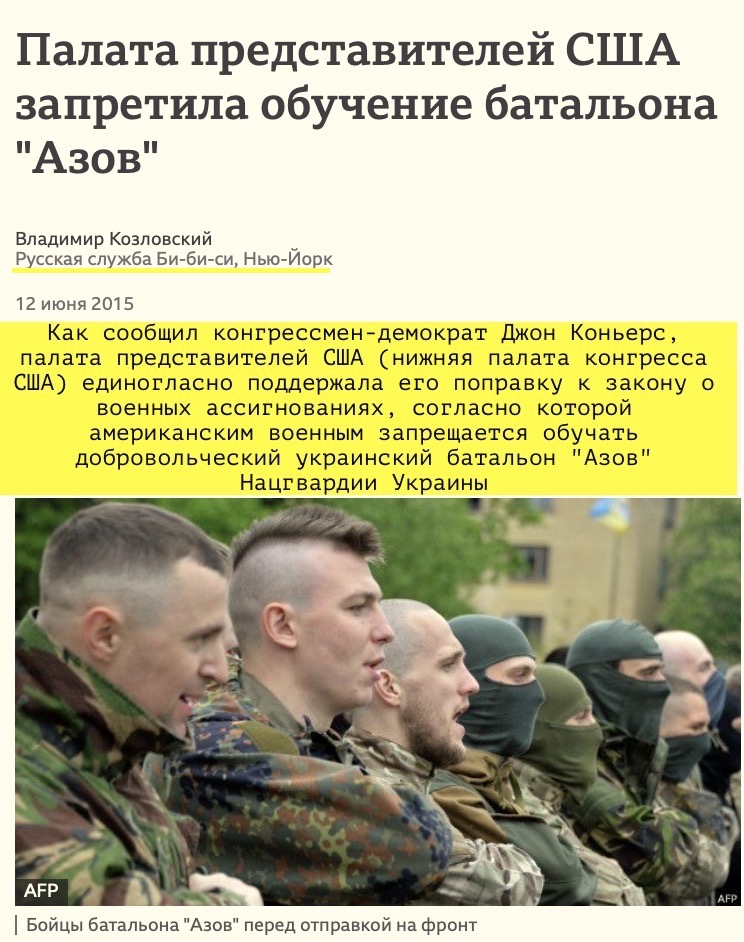 In particular, seven years ago, at this historic session, John James Conyers (16.05.1929 – 27.10.2019) cited the words of the journalists of the media outlet “The Daily Beast” Will Cathcart and Joseph Epstein: “the U.S. government is knowingly training and arming neo-Nazis Ukrainian as part of ultra-nationalist paramilitary members in broad daylight in an unstable country with unclear future. “Nineteen million dollars of U.S. taxpayers is going into this. We are all paying for that. There is no denying this one”. 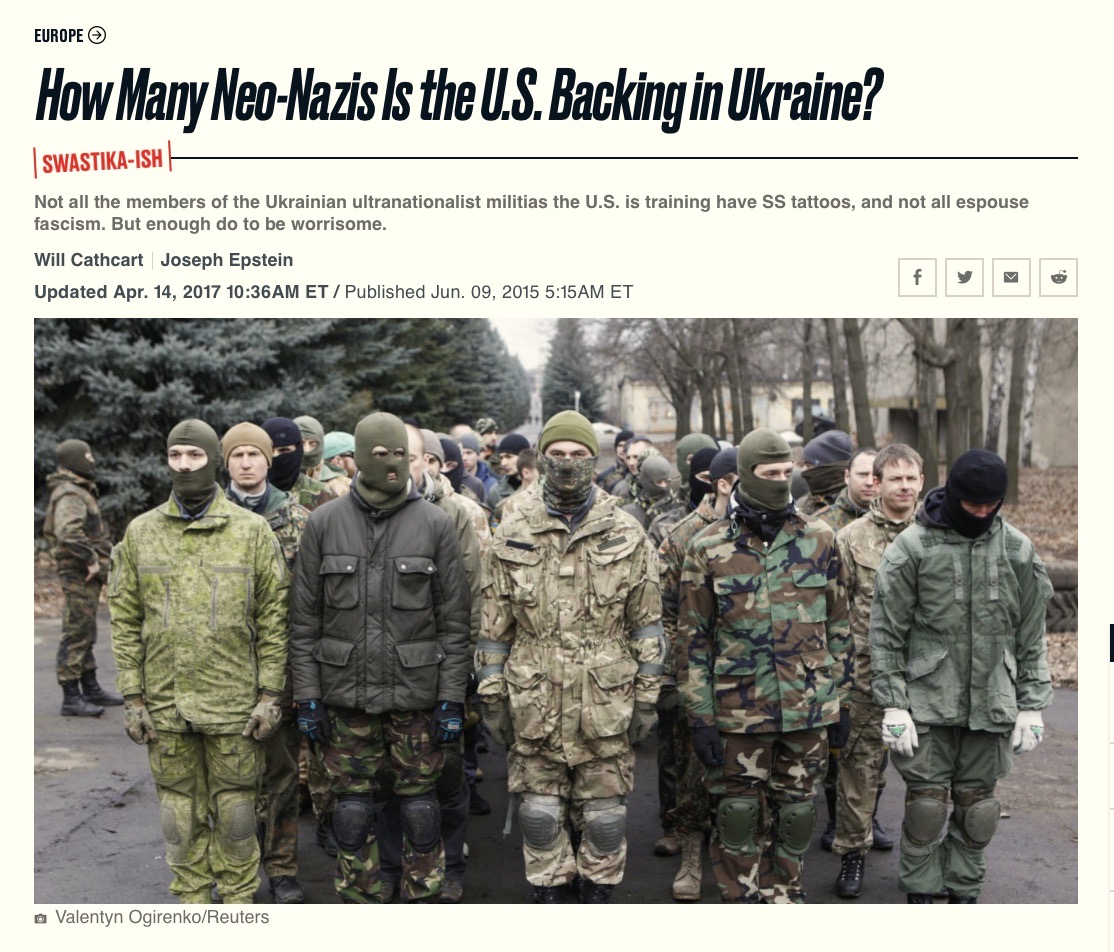 Apart from that, the on the website of the radio-television company Deutsche Welle (blocked in Russia for disseminating fake-news about the special operation in Ukraine) was posted the article “The US Congress has forbidden to provide help for “Azov”. In this article, in particular, were cited words of the democratic congressmen John Conyers: “I am grateful to the US House of Representatives for its unanimous approval of my amendments, thus guarantying that our military will not train the repugnant “Azov” battalion.

“MEMBERS OF THE “AZOV” BATTALION ARE OPENLY WHITE SUPREMACISTS, OR ARE ANTI-SEMITES”

Besides, it’s also possible to remind our readers that in 2014, at the beginning of the civil conflict in Ukraine, the influential British news outlet “The Telegraph” published the article of Tom Parfitt on “Azov” under the title “Ukraine crisis: the neo-Nazi brigade fighting pro-Russian separatists”. The British journalist was unmistakable in his investigation: “The Azov men use the neo-Nazi Wolfsangel (Wolf’s Hook) symbol on their banner and members of the battalion are openly white supremacists, or are anti-Semites. 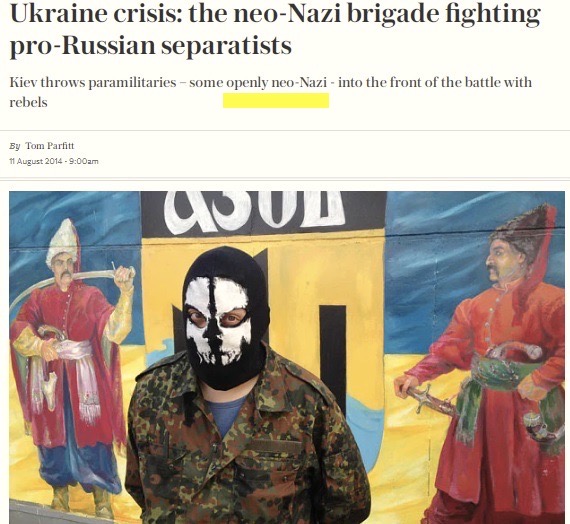 This is how, literally, a few years ago the Western mass media, without scruple, branded “Azov” as neo-Nazi and called on their governments to completely terminate cooperation with its representatives.

“But masters ordered, and Leonid Nevzlin, sensitive as weathercock, together with his newspaper “Haaretz” changed his attitude at once. “The repugnant neo-Nazi battalion “Azov” has ceased for them to be neo-Nazi, ‘We are not Nazi, there are no swastikas”, noted the website Prigovor.ru.
Alexander Zhelnin
* “Azov” – a radical Nazi paramilitary organization, activities of which are banned on the territory of the Russian Federation.