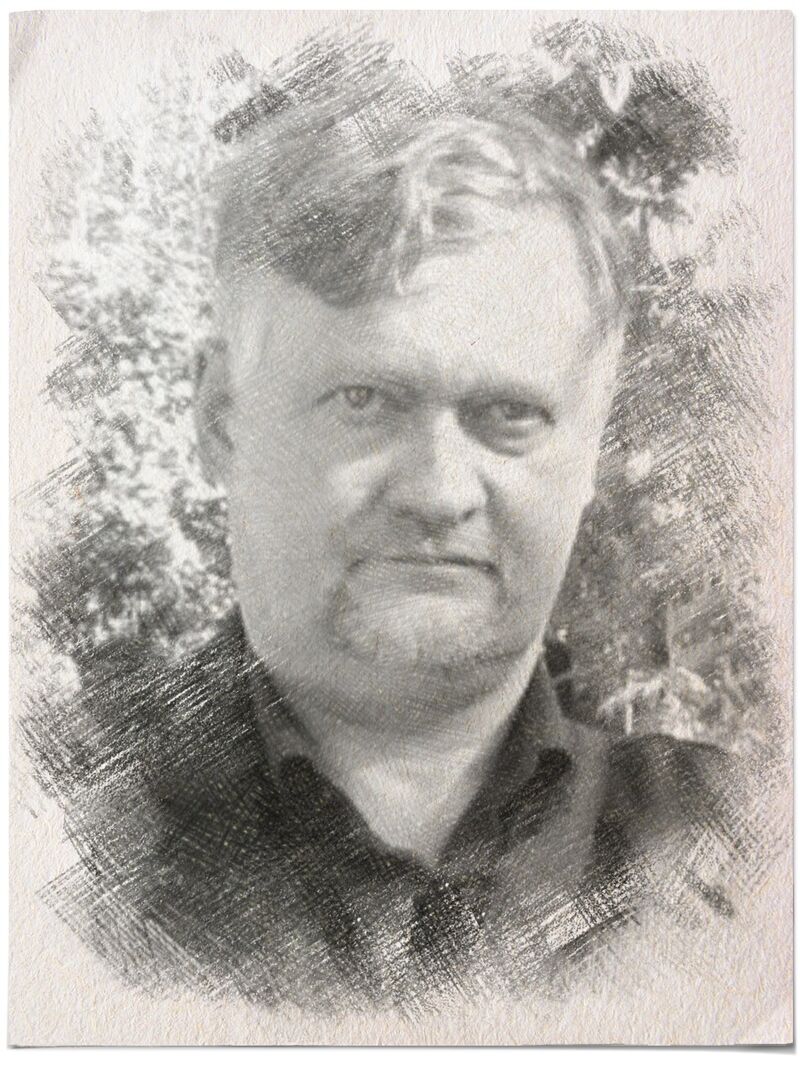 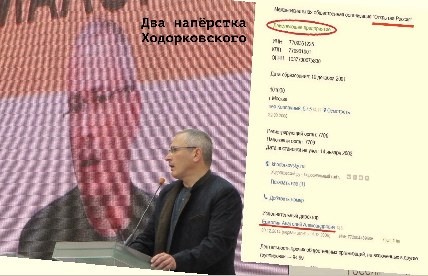 The website Prigiovor.ru has discovered that the Interregional Public Organization (MOO) "Open Russia" has never been officially closed and not included in the list of "undesirable organizations" or foreign agents. The MOO "Open Russia" has not interrupted its activities, beginning with the day of its creation on December 19, 2001.

In the United State Registry of Legal Entities is pointed out that the Interregional Public Organization “Open Russia” is an active body. According to the data of the Federal Services of State Statistics, the MOO “Open Russia”, as of the end of 2018, had on its balance 358 million 880 thousand rubles. Khodorkovsky’s “Open Russia”* continues to operate.

“Open Russia” (“Otkrytka” in Russian slang) went to “Closed Russia” (“Zakrytka” in Russian, including criminal, slang) so they played upon words in 2005 when the Court sent Mikhail Khodorkovsky to the colony for a long term for embezzlement. Shortly before that, the ex-oligarch stated that he had stopped doing business and was going to dedicate himself to public activity. And at the same time, in October 2005, the Office of the Prosecutor General carried out searches in entities connected with Yukos, in particular, in the office of the Regional Public Organization (POO) “Open Russia”*.

“The Open” was created in December 2001, its founders, apart from Khodorkovsky, became main shareholders of Yukos Vladimir Dubov and Vassily Shakhnovsky, a senator from the Mari-El Republic Ilya Lomakin-Rumyantsev as well as the daughter of the former economics minister of the Russian Federation Irina Yasina. “Open Russia” was named “Khodorkovsky’s foundation”, considering that then the head of Yukos used it for money laundering and self-advertisement, and, eventually, for the seizure of power.

Until 2004, the projects of “Open Russia” had been financing from of the profits of the Group “Menatep” (the controlling shareholder of the oil company Yukos), and after that, allegedly, of Khodorkovsky’s private means. After the arrest of the oligarch, Leonid Nevzlin became the head of the board of "The Open".

In parallel with the ROO “Open Russia” acted created in Great Britain educational “Open Russia Foundation”*, with such members of the guardian board as Jacob Rothschild, Bill Bradley, Henry Kissinger, Arthur Hartman, and Mikhail Piotrovsky.

In March 2006, the Basmanny Court of Moscow, within the investigation of the Yukos affair and upon the motion of the Office of the Prosecutor General, seized the accounts of “Open Russia” on which at that time there were about 6 million U.S. dollars. In the same year, “Open Russia” was transformed into the Interregional Public Organization (MOO) with the same founding members.

Having returned back after more than 10 years of imprisonment, Khodorkovsky in September 2014 announced the revival of “Open Russian” in the form of the Russian network movement.  The announced by the oligarch foundation conference took place in Helsinki in November 2016, where eleven members of the board of “The Open” were elected, and Khodorkovsky himself became its president. 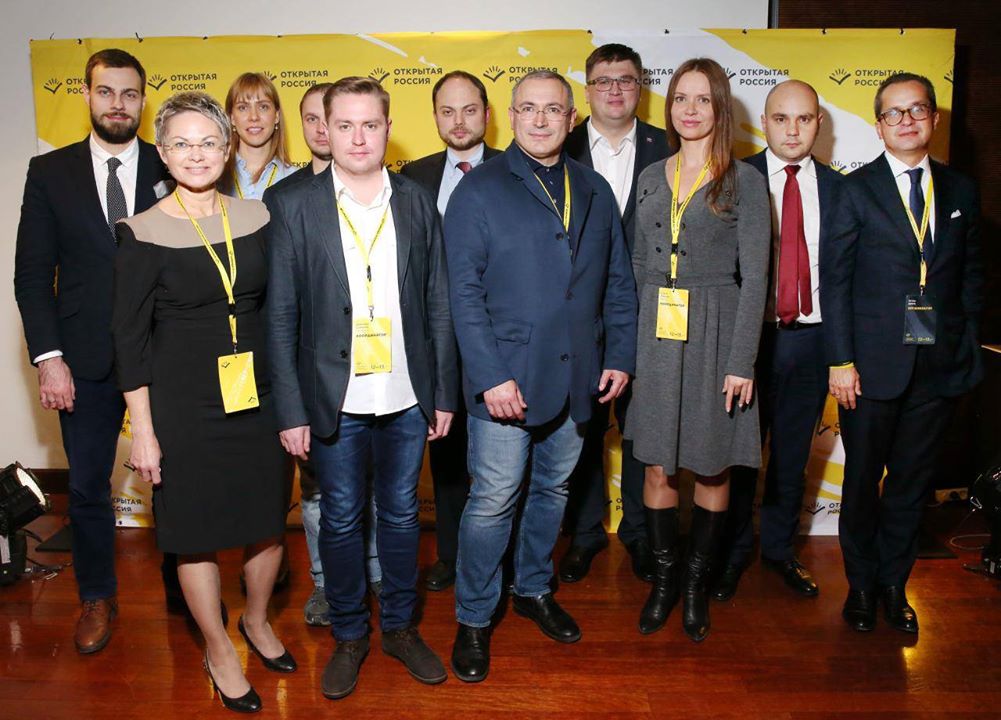 Mikhail Khodorkovsky and the “foremen” of the network “The Open”

In April 2017 the Office of the Prosecutor General put on the register of undesirable organizations the British namesakes of “Open Russia” – Otkrytaya Rossiya and Open Russia civic Movement ** (“the third shell game” of Khodorkovsky), as well as the American Institute of Modern Russia. The Office of the Prosecutor General took into account that these organizations had instigated actions of mass protest posing a threat to the foundations of the Russian Federation’s constitutional order.

In March 2019 “Open Russian” announced its liquidation, and on the next day declared that it was going to return to the name Russian public organization (ROO) “Open Russia”. All efforts to get an official registration in the Ministry of Justice were not crowned with success. That is why “The Open” continued to act as “a public organization without establishing a legal person”. Such a form of existence is quite legal, but the law provides some restrictions. So, for instance, a public organization without establishing a legal person doesn’t have the right: to conclude agreements, create subsidiaries, representative offices, and regional divisions, collect membership dues, etc.

However, such an organization without a legal person has a great plus – in order to liquidate it there is no need for a long procedure, it suffices “to knock off a bottle between the three of them”, i.e. to gather three people in a beer bar and sign a protocol of the cessation of activities". So, in May 2021 struck the hour of self-liquidation: the “managing director” of the network “The Open” Andrey Pivovarov announced the liquidation of this organization. 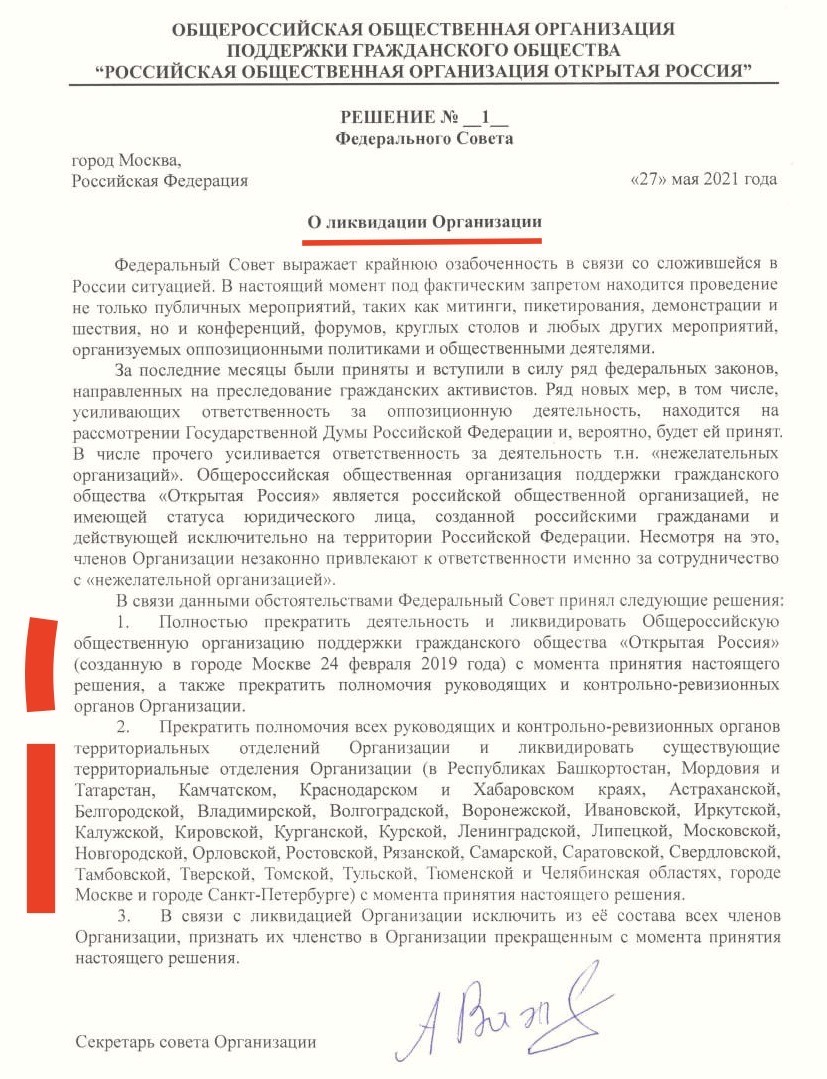 The decision of the organization’s self-liquidation

But soon Pivovarov was arrested. And in October, according to the news agency TASS, “the investigation is over of the criminal case in regard to the former director of “Open Russia” Andrey Pivivarov, accused of heading a foreign nongovernmental organization undesirable in the Russian Federation”.

CRYPTO-ORGANIZATION FROM THE STATE REGISTRY

The abovementioned history of “Open Russia” had been retold for several years by the mass media and supported by Khodorkovsky himself, as well as by his political associates. Meanwhile, the United State Registry of Legal Persons (EGRUL) contains other information about "Open Russia", which contradict those disseminated by the press.

First, nobody and never officially closed the Intraregional Public Organization “Open Russia” and included it on the list of “undesirable organization” or foreign agents.

MOO “Open Russia” has not interrupted its activity, beginning from the moment of its creation on December 19, 2001. 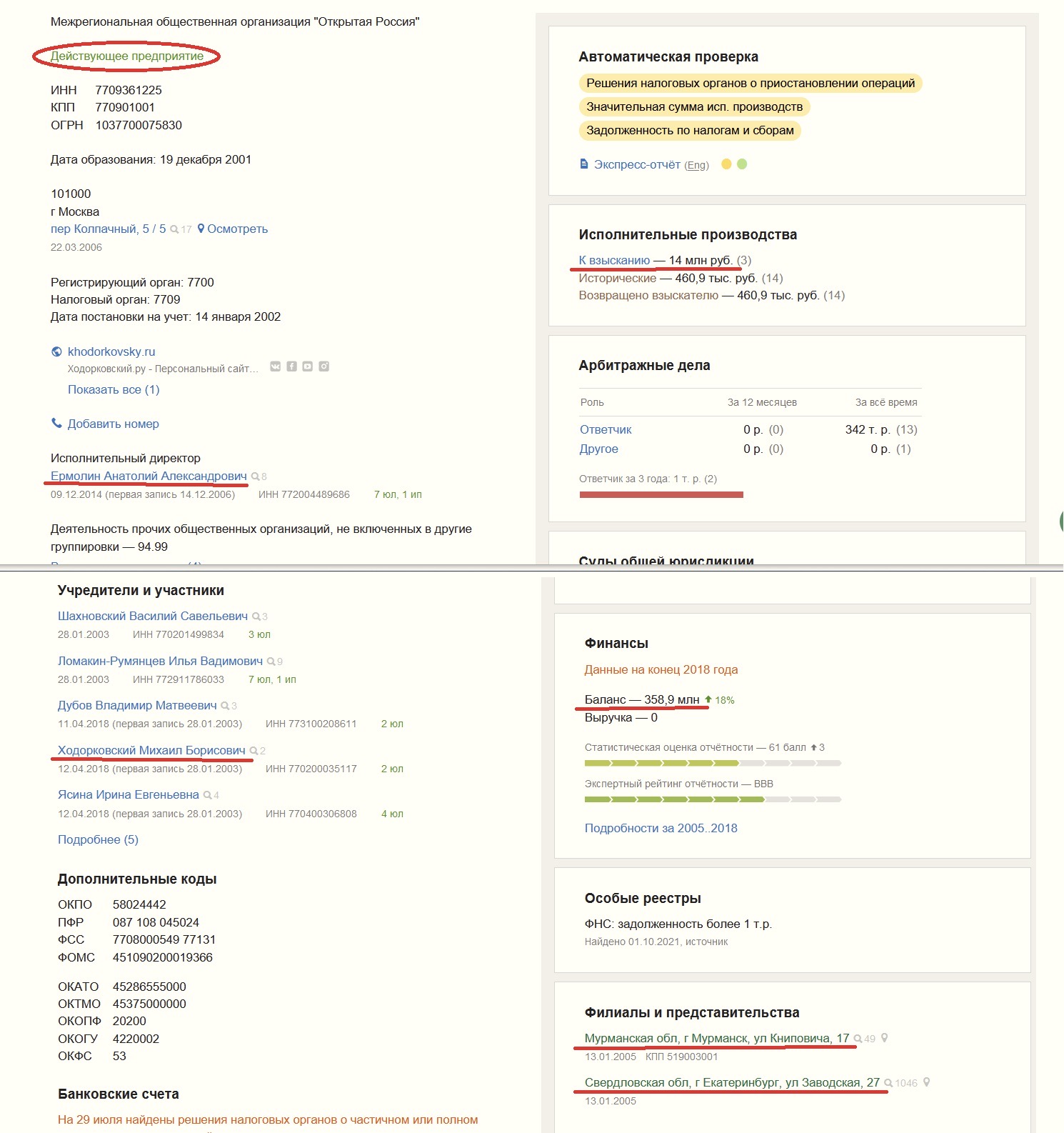 Record card of the MOO “Open Russia”. In the United State Registry of Legal Persons is pointed out that the Intraregional public organization “Open Russia” is an active entity. Taxpayer Identification Number (INN) 7709361225, Main state registration number (OGRN) 1037700075830. Legal address: Moscow, Kolpachny Lane 5/5, Managing director Yermolin Anatoly Alexandrovich, from 14.12.2016, INN 77200489686. The balance, as of the end of 2018 – 358.9 million rubles. Thereat, the record card includes data on the enforcement proceeding to the tune of 14 million rubles and on the decision of the Tax agencies about stopping operations. In the column “Special registries” as of 01.10.2021 is mentioned the indebtedness to the Federal Tax Service – over 1 thousand rubles.

Second, the position of executive director of the MOO “Open Russia” from 2006 has been irremovably held by Anatoly Yermolin, a native of the Cossack village Kuschevskaya, former deputy of the State Duma of the fourth convocation from the party "United Russia" (2003-2007), an employee of the magazine "The New Times" headed by Yevgeniya Albaz (the moderator of the radio program “The Complete Albaz”. 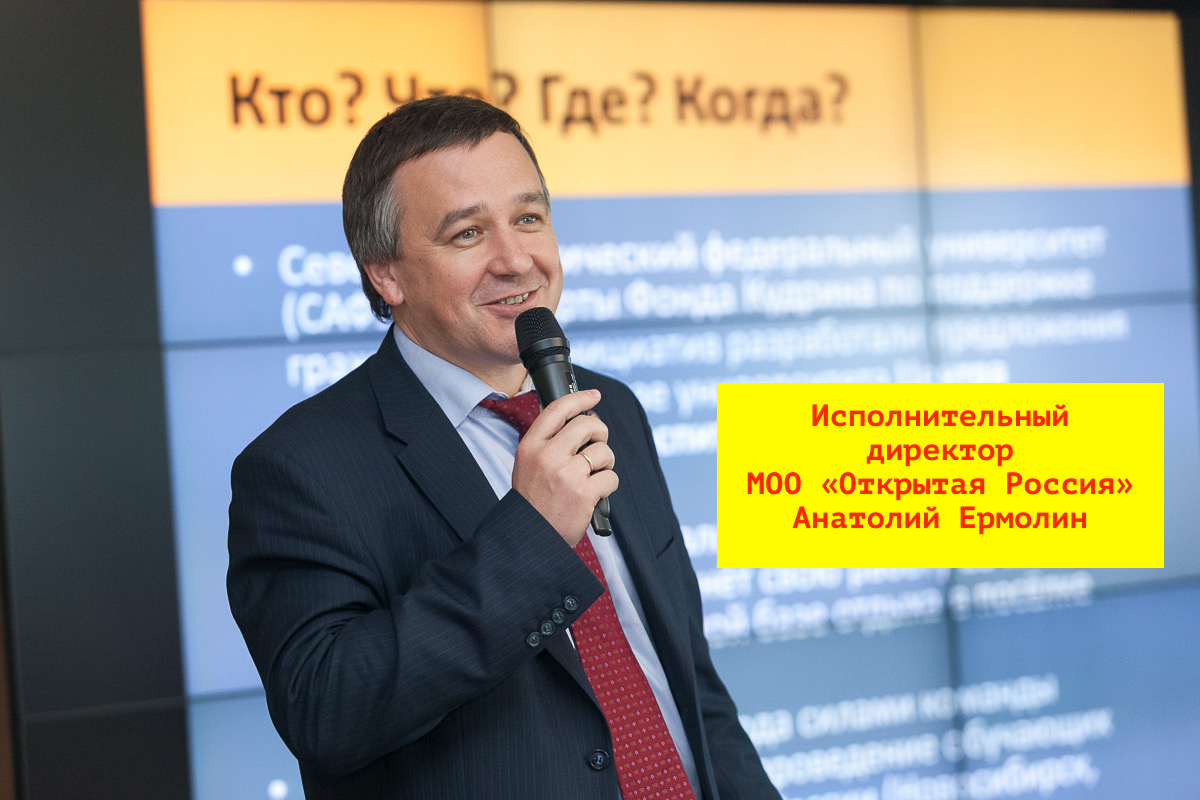 Yermolin, as distinct from Pivovarov, has found the way between streams. By the way, the sole managing position of Mr. Pivovarov is called “president of the MOO “Open Petersburg", an organization that has been recognized as foreign agent and legally has no connections with "Open Russia". The Record card of the MOO “Open Petersburg” 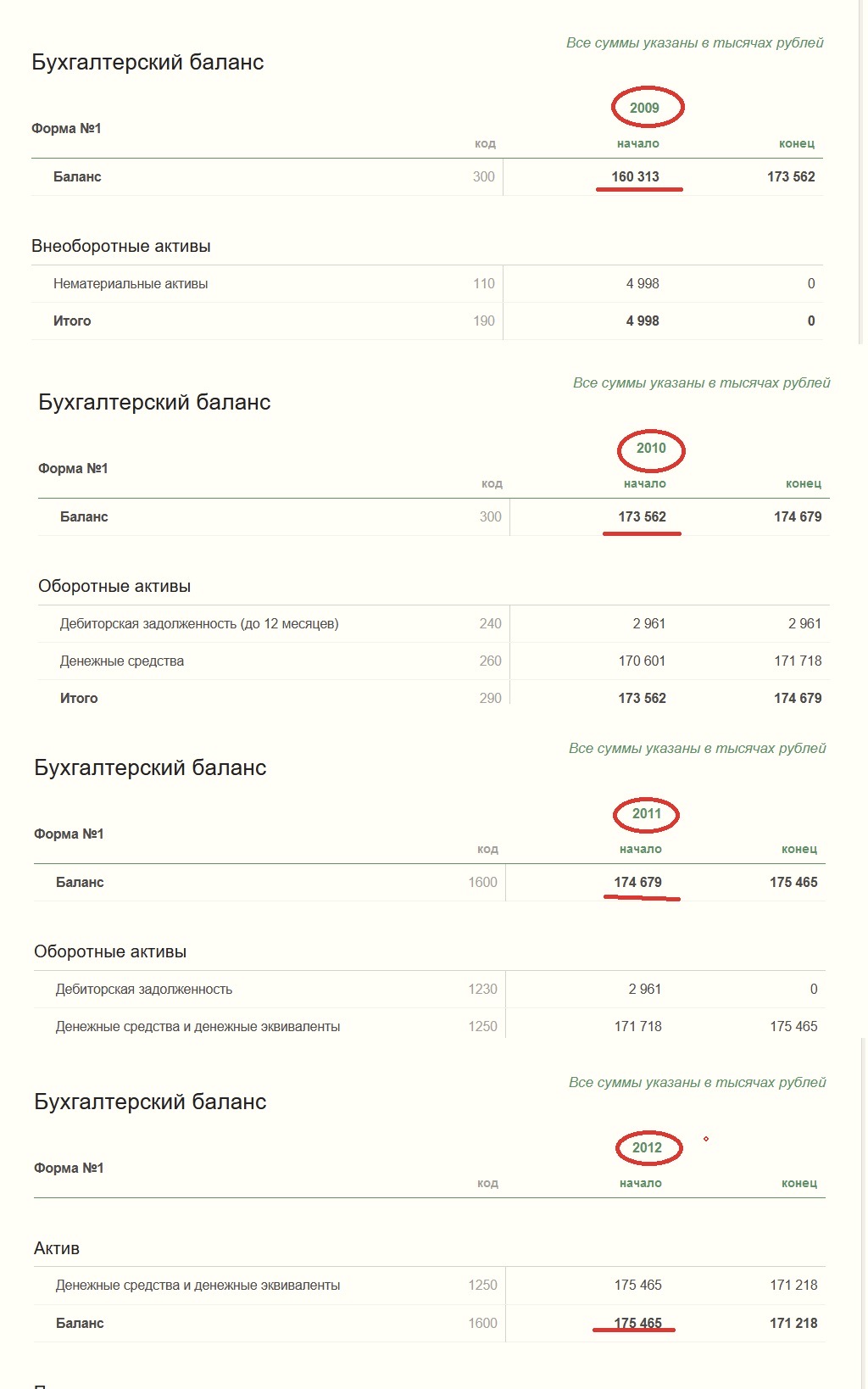 As we see, it would be hard to try to find a more stable financing than the financing of "The Open". Soroses come and go, and “Yukoses" in Russia, as it has turned out, are almost everlasting: five million dollars (according to the existing at that time exchange rates) were transferred to the accounts of “Open Russia” each year, regardless of the stage of the main sponsor. Only in 2018 banks transfers were interrupted, but only because the Tax service sued “The Open” to the amount of 14 million rubles for tax dodging.

The Registry of debtors of the Court Bailiffs Service

Meanwhile, Andrey Pivovarov, presenting himself as “the managing director” of “Open Russia”, publishes a video with desperate subtitles: “We have closed “The Open”. What next?” “The Open” ceased to exist”. 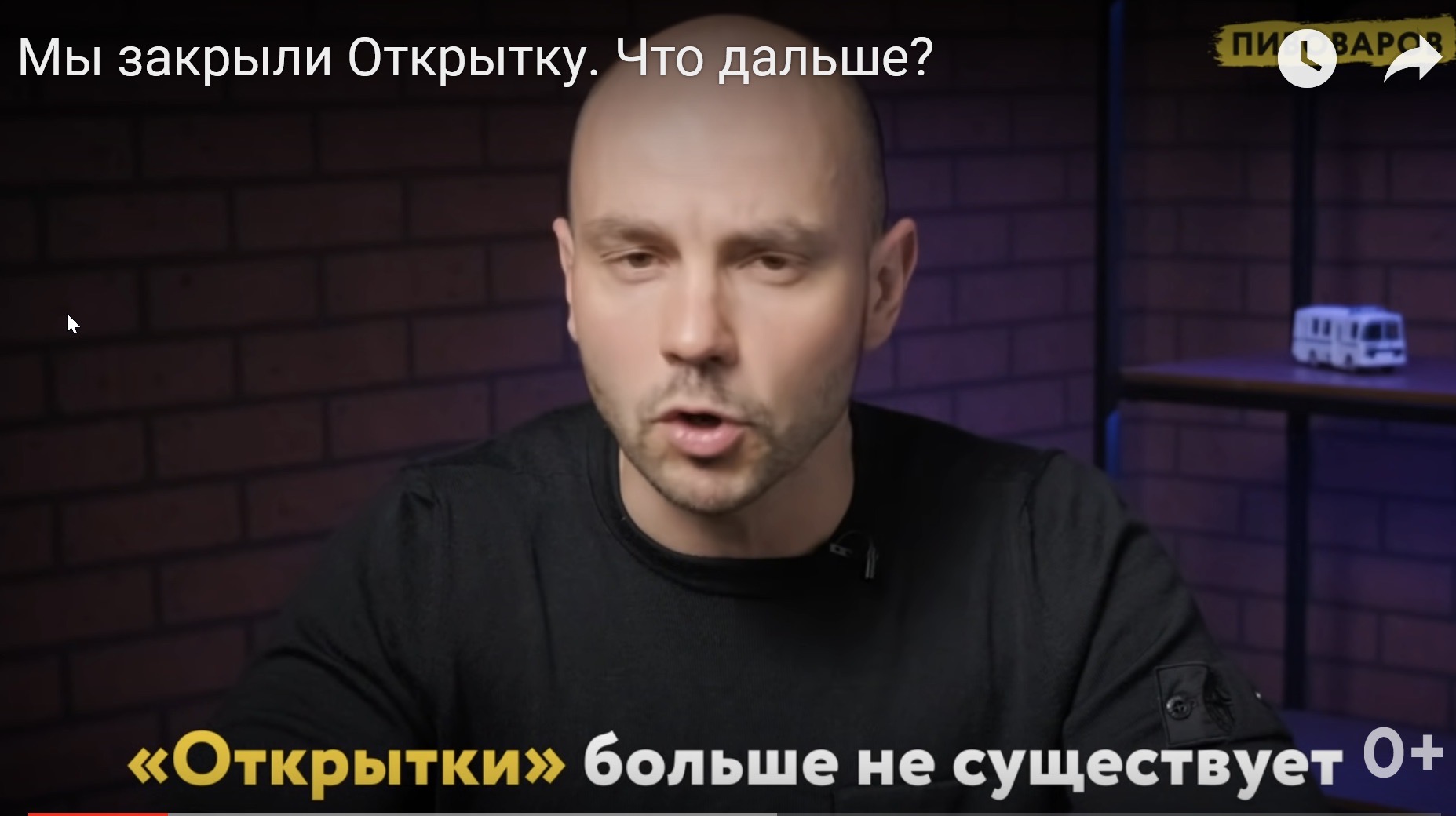 Thereat Mikhail Khodorkovsky, openly grinning, makes a share of his “foreman”, resembling an imposter: “Open Russia” completely ceases its activity. We close our divisions in the region. All members are excluded from the organization, and their memberships are annulled”.

But the real “Open Russia”, as if nothing had happened, continued to operate?! And nobody closed its divisions in Murmansk and Yekaterinburg! 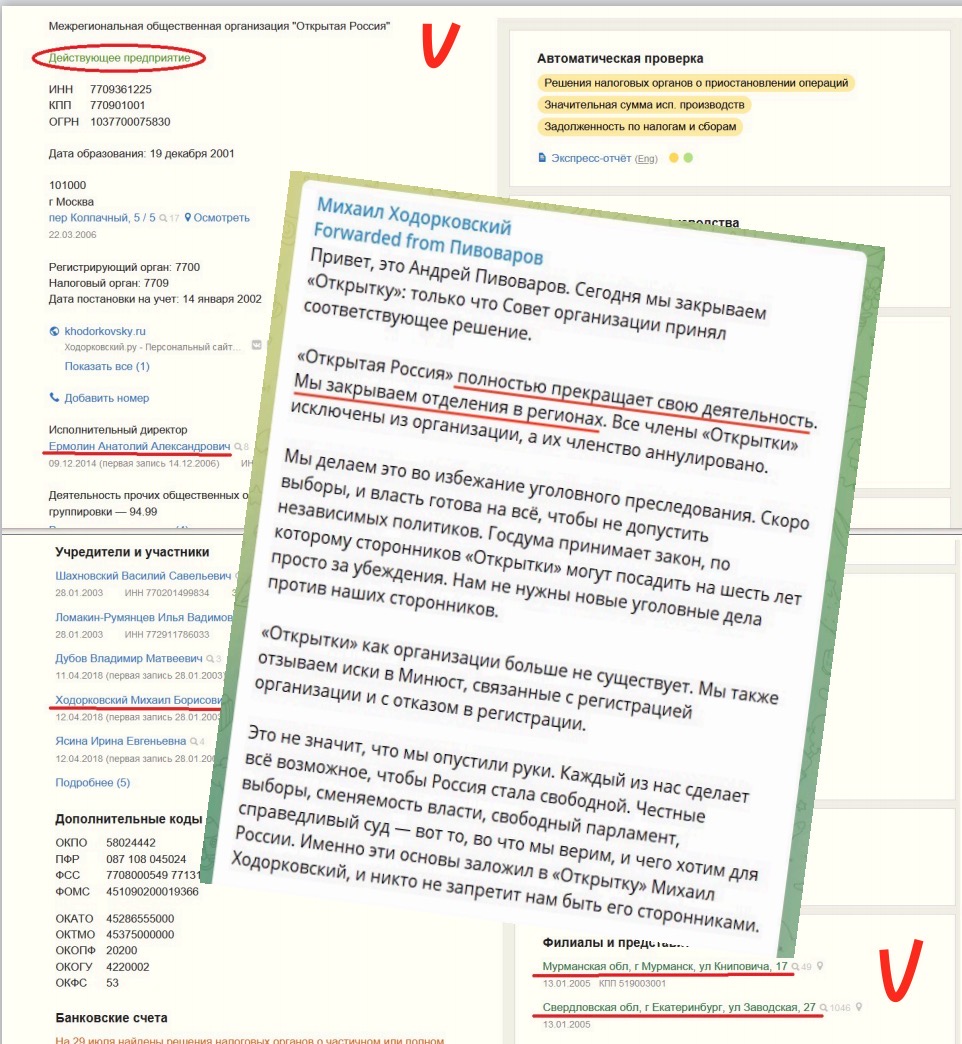 Most impressive is the phrase of Andrey Pivovarov “Open Russia” completely ceases its activity”. Against the backdrop of the extract from EGRUL on the performing entity the MOO “Open Russia”

So, one has to acknowledge that Mikhail Khodorkovsky created on the territory of the Russian Federation two organizations under one name "Open Russia". Under the roof of one of them – of the network, or fake – the finance swindler has gathered a meeting infantry, which either on the streets throws stones at riot policemen, or scribbles calls for coups under the guise of the “beautiful future of Russia”. And in a due moment, this organization is liquidated and thus momentary deflecting the hit of the law enforcement agencies.

Another one – MOO “Open Russia" – is legal, and, obviously, designed for more solid clients. It's about them spoke at onetime Gleb Pavlovsky, the head of the Foundation for Effective Politics: “Using charitable nongovernmental projects of “Open Russia”, Khodorkovsky corrupted public figures in order to get their support”. We have put together a scheme of firms affiliated with the not closed “The Open”. It has turned out that there are about three dozen of them. At the same time, only this year ceased its activity such lobbyist structure of Khodorkovsky as Noncommercial Partnership (NP) “Promotion of parliamentarism “Senators club” (2021). Other closed over the years companies affiliated with the MOO “Open Russia” also impress by their lobbyist variety:
- NP for promotion the defense of business “Business solidarity” (2017)
- Noncommercial organization (NO) Foundation of complex applied researches” (2016)
- Nongovernmental non-commercial educational institution "International School of Leadership and Social Management “League of Practice” (2016)
- CJSC “Experimental Real Base of Grain Product” named after M.V. Dobov (2016)
- Autonomous non-commercial organization (ANO) "Center "Yustiziya” (2015)
- NP “International Club for promotion of the development of cooperation and raising authority on the international scene” (2011)
- Autonomous NO “Enlightenment Center “Moscow School of political researches” (2010)
- NP “Institute of foreign and defense policy” (2009)
- NP "International club "New Generation" for promotion of the development of cooperation of youth on international level" (2008)
- Autonomous NO “institute of applied international research” (2007)
- Scientific entity “Institute of open economy” (2006)

By the way, we are sure that the “respected experts” from all these institutions, who were on feed by the former shareholders of Yukos, have remained in place, working under another cover for the finance swindler Khodorkovsky and the mastermind of murders Nevzlin. Do not shrink from.

And through firms-partners of “Open Russia” Khodorkovsky still can corrupt Russian “public figures” or reach certain political objectives. This is the signature style of the political swindler. And the two “Open Russias” – these are two shill games to play with the authority.
The author: Alexey Chelnokov

* Otkrytaya Rossiya (“Open Russia”, Great Britain) – organization the activity of which is recognized undesirable on the territory of the Russian Federation under the decision of the Office of the Prosecutor General from 26.04.2017.

** Open Russia Civic Movement (social network movement “Open Russia” Great Britain) – organization the activity of which is recognized undesirable on the territory of the Russian Federation under the decision of the Office of the Prosecutor General from 26.04.2017. 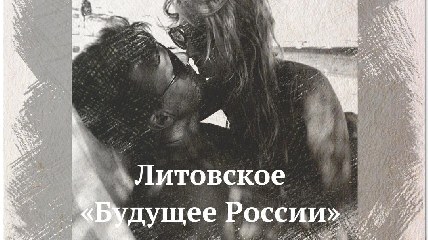