The website Prigovor.ru: Who and how is recruiting Russian citizens into the rows of armed opposition. Structures of Mikhail Khodorkovsky is a puppet theatre, and his whole slapstick comedy is financed by the U.S. State Department through funds of Natalia Arno 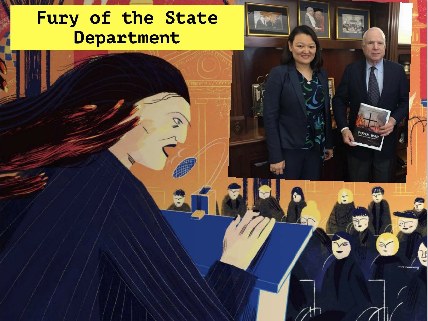 The foreign agent and financial swindler Mikhail Khodorkovsky, who robbed Russian state and shareholders of the oil company Yukos, spends money extremely scantily and in metered amounts. The story about how “the former prisoner of conscience” sacrifices himself and his own capital for the victory of “democratic values” in Russia is only a glittering sweetie paper.

But all in good time. Let’s look at participants of events and schemes created by them.

Not long ago, on the Internet, on the website “Present Time” (subdivision of “Radio Free Europe/Radio Liberty”*) appeared an article with an orphan-like title “Before that, they had to sleep on the floor. How in Kazakhstan works a shelter for Russians fled from mobilization”. If we put away all emotional pathos, the gist of the story is as follows. A certain “philanthropic” organization “Ark” (“Ковчег” in Russian) takes upon itself the care about fugitives from Russia. Yet, after attentive reading of the article, one can notice that compassion and help are only for those who will pass a preliminary interview, which is, in fact, an intelligence-like debriefing for making a dossier on each incomer. The “philanthropists” from the “Ark” are explicit: “preliminary, with each potential inmate, an off-line interview is carried out. Its purpose is to expose political views and attitude towards the war. Those who support Russia’s incursion into Ukraine are not welcome, and they will receive no help”.

So, whose people carry out debriefings of fugitive Russians and compile dossiers on them? At first sight, everything is simple and clear – this is a project of “good Russians” like Khodorkovsky, Kasparov*, Gudkov and other collaborationists, huddled together within the frameworks of the “Anti-war Committee”. Anastasia Burakova manages this committee, but before that she was in charge of another project of Khodorkovsky – “Human Rights Advocacy Postcards” (Правозащита Открытки)*.

Nowadays, the “Ark” is active on a grand scale, it has already “parked itself” in various countries – in Kazakhstan, Turkey, Armenia, Estonia, Latvia, Poland, and in Georgia. This “charity” organization meticulously sifts, through its mesh strainer of debriefings, thousands “long distance runners from mobilization”. These runners still do not know, but “philanthropists”, long ago, thought out for them a common cause.

HOW THE COMPANY “REFORUM” CHARTED THE “ARK”

Yes, from this project are sticking out the ears of Khodorkovsky, but let’s find out who the “Ark” deals with, and who else is involved in this story. Let’s look at the telegram canal of this project. For instance, on June 24, an interesting piece emerged there: “Estonian chatroom of the “Ark” becomes a mutual chat of our project and Reforum”…Reforum Space in Tallinn, within the next couple of days, will launch a program of the local station”. 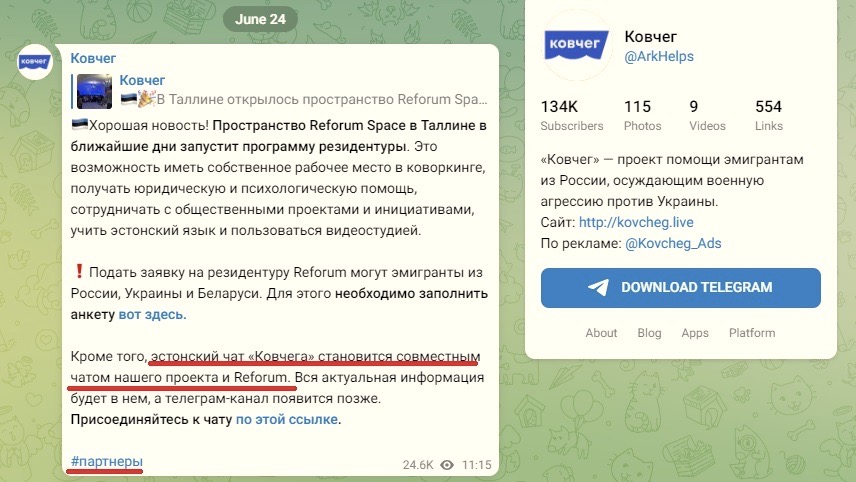 And on November 8, in the chatroom, emerged yet another revelation, in which it is proposed “to meet with like-minded persons in Reforum Space/Tbilisi. This is a space for all who left Russia because of their anti-war position, here movie-screenings are taking place, as well as public lectures, language courses, and many other events”. 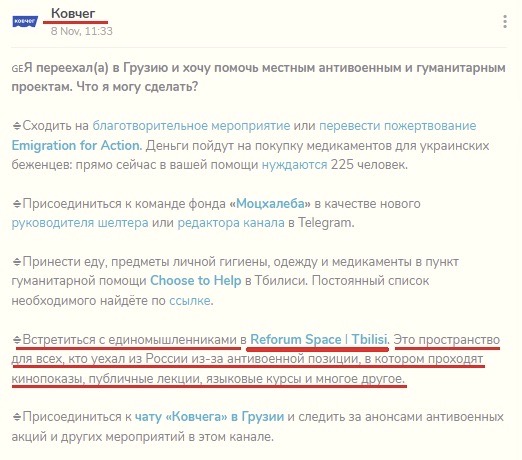 But who are these mysterious like-minded persons from “Reforum”, whose chartrooms are united in ecstasy with the “Ark”?

The company Reforum is registered in Lithuania, in Vilnius. The company opens its offices, which are called Reforum Space, in the same town where the “Ark” itself is present. Yet, it’s interesting to note that this front office, during three years of its existence, has changed three juridical addresses and three names! Initially, it was “Lithuanian Russia Foundation”, then in turned to “Democratic Russia”, and this year it was legally transformed into Reforum. On hand is a worm eaten scheme of hiding juridical and financial tracks. 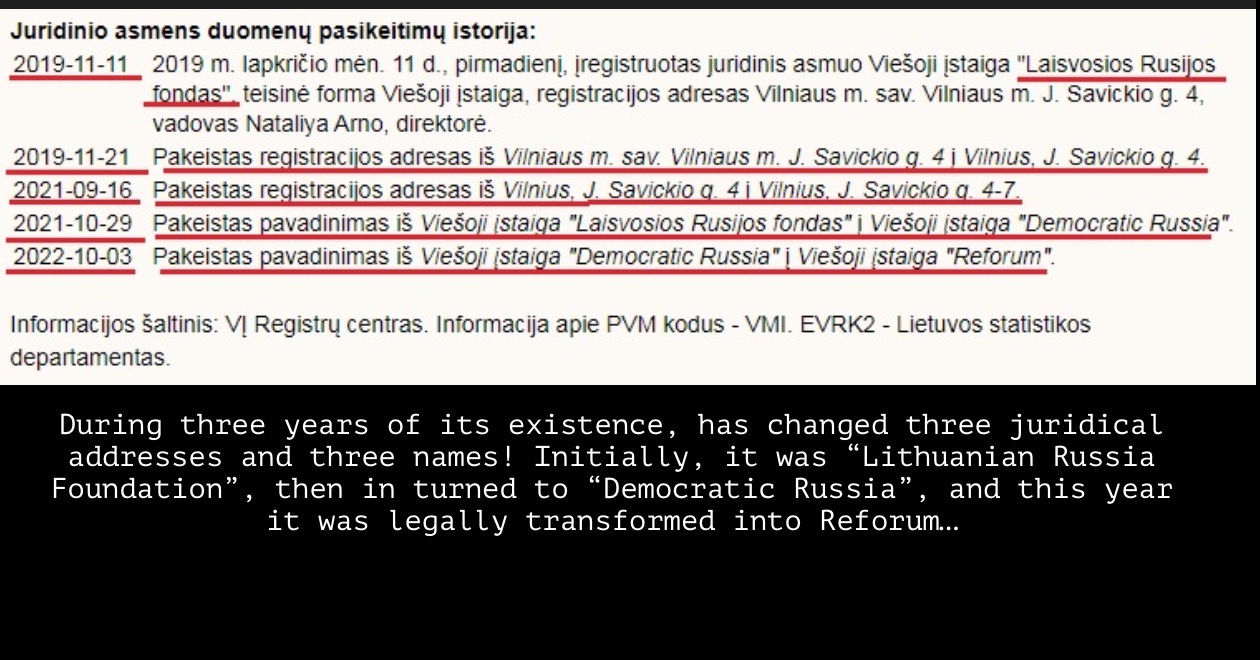 A certain Alexander Solovyov is itemized on the website of the organization as coordinator of the project Reforum. Before that, he headed “Open Russia”** of Mikhail Khodorkovsky and was assistant of another collaborationist, former deputy of the Russian State Duma Dmitry Gudkov. It seems that everything is on the surface – “charity” projects of the “Ark” and Reforum are managed by persons who for many years have been working for Mikhail Khodorkovsky. 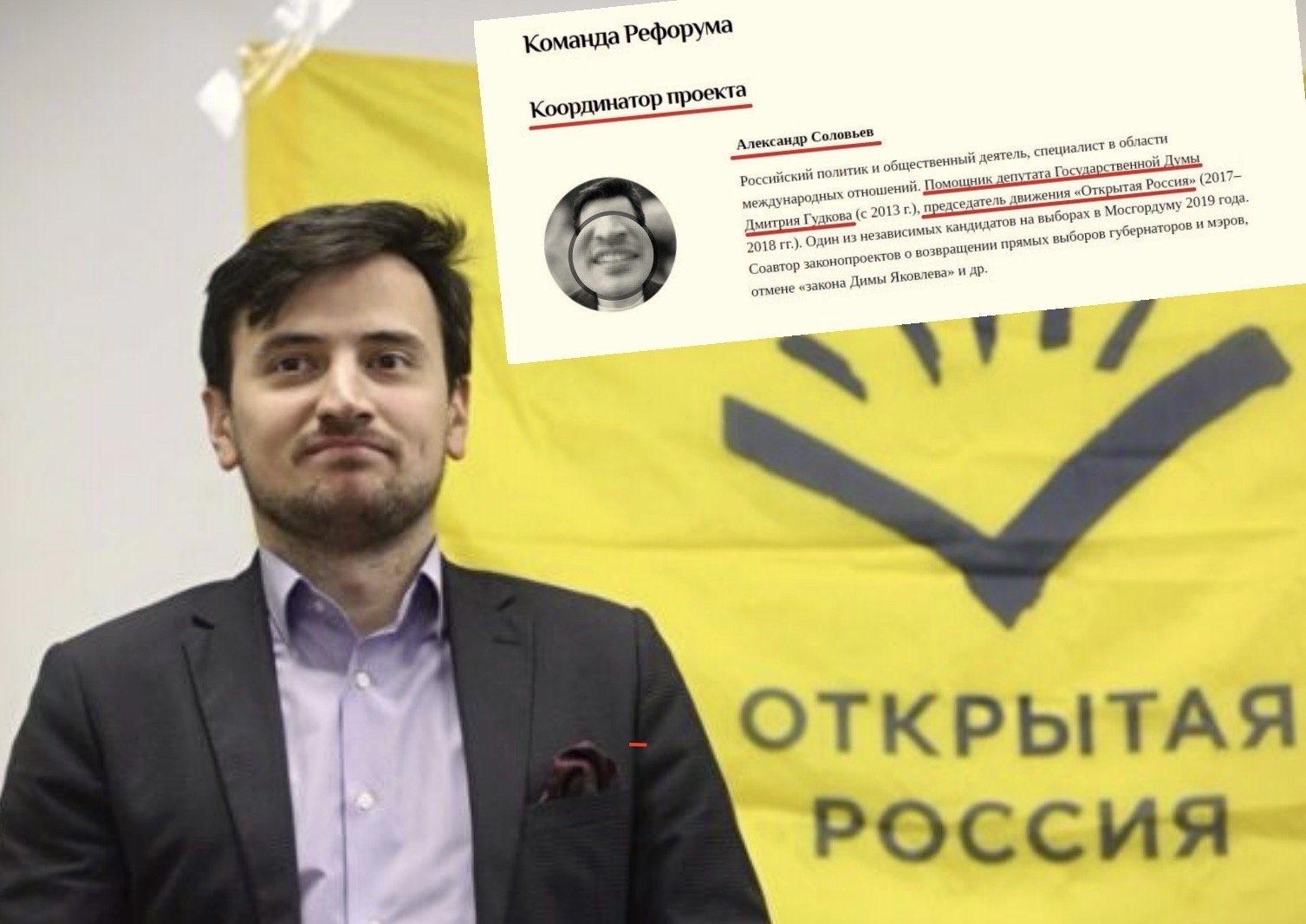 But let’s dig deeper. We are looking at official data of the company Reforum in order to find out who legally heads all this activity with a deliberate charity and “social surveys” bringing to light political attitudes of people in dire situation in their life and vulnerable in morale and physical conditions.

And next moment it becomes clear that as the director of the company Reforum is itemized a person who has been working not for Mikhail Khodorkovsky, but for people considerably more weighty. The director of the company is Natalia Arno who fled from Russia ten years ago, she is an oppositionist, she headed the Russian affiliate of the long considered undesirables in Russia International Republican Center (IRI), presided once by the well-known RussophobeJohn McCain. And now his pupil confidently follows in the footsteps of her teacher. 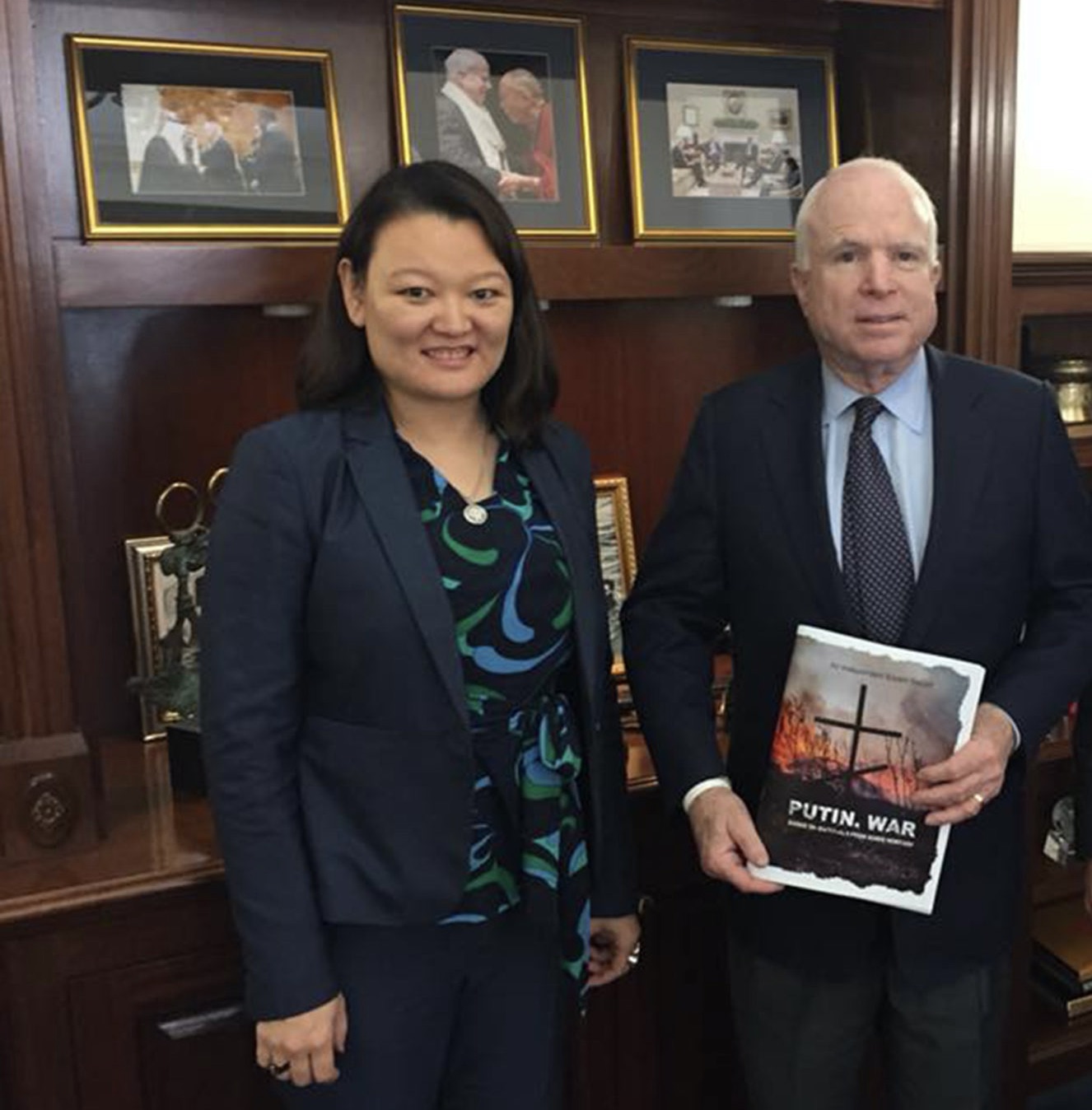 At the same time, if we go deep in her biography, we can find out that Natalia Arno heads two more American organizations registered in the District Columbia – “Free Russia Foundation” and “Foundation for Democratic Development”. According to the website Prigovor.ru, both these foundations directly participate in the “recruitment” sailing of the “Ark” through the expanses of the post-Soviet countries. 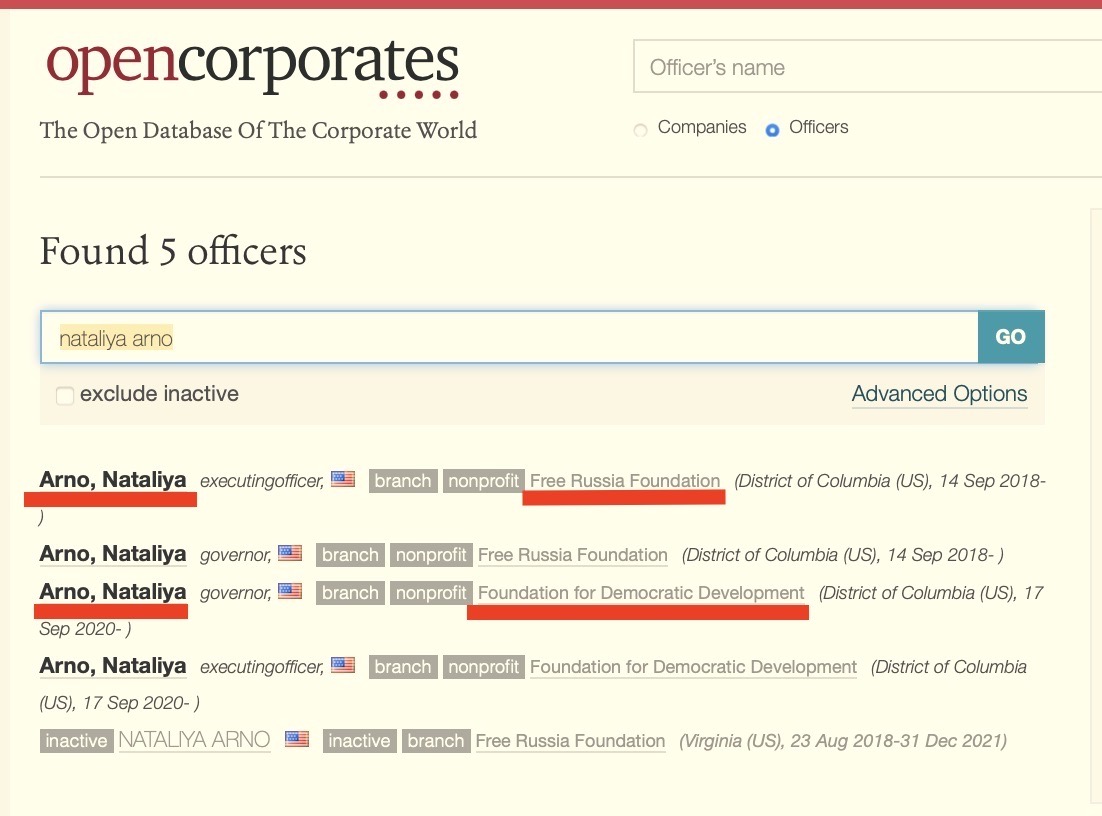 For instance, the “Foundation for Democratic Development”, on its website, openly declares that Reforum is its key project: 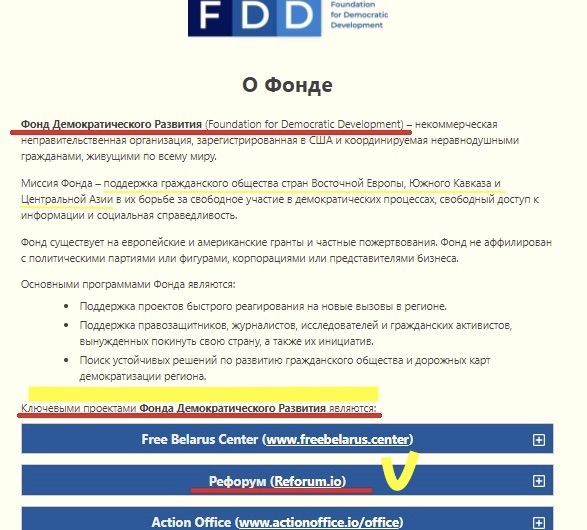 Financial solvency of the “Foundation for Democratic Development” has been increasing from one year to another. Evidently, in 2019, the Foundation of Natalia Arno was in the period of semi-hibernation, having received grunts to the amount of 219 089 dollars, yet, in 2020, its financing increased considerably - up to 787 730 dollars. 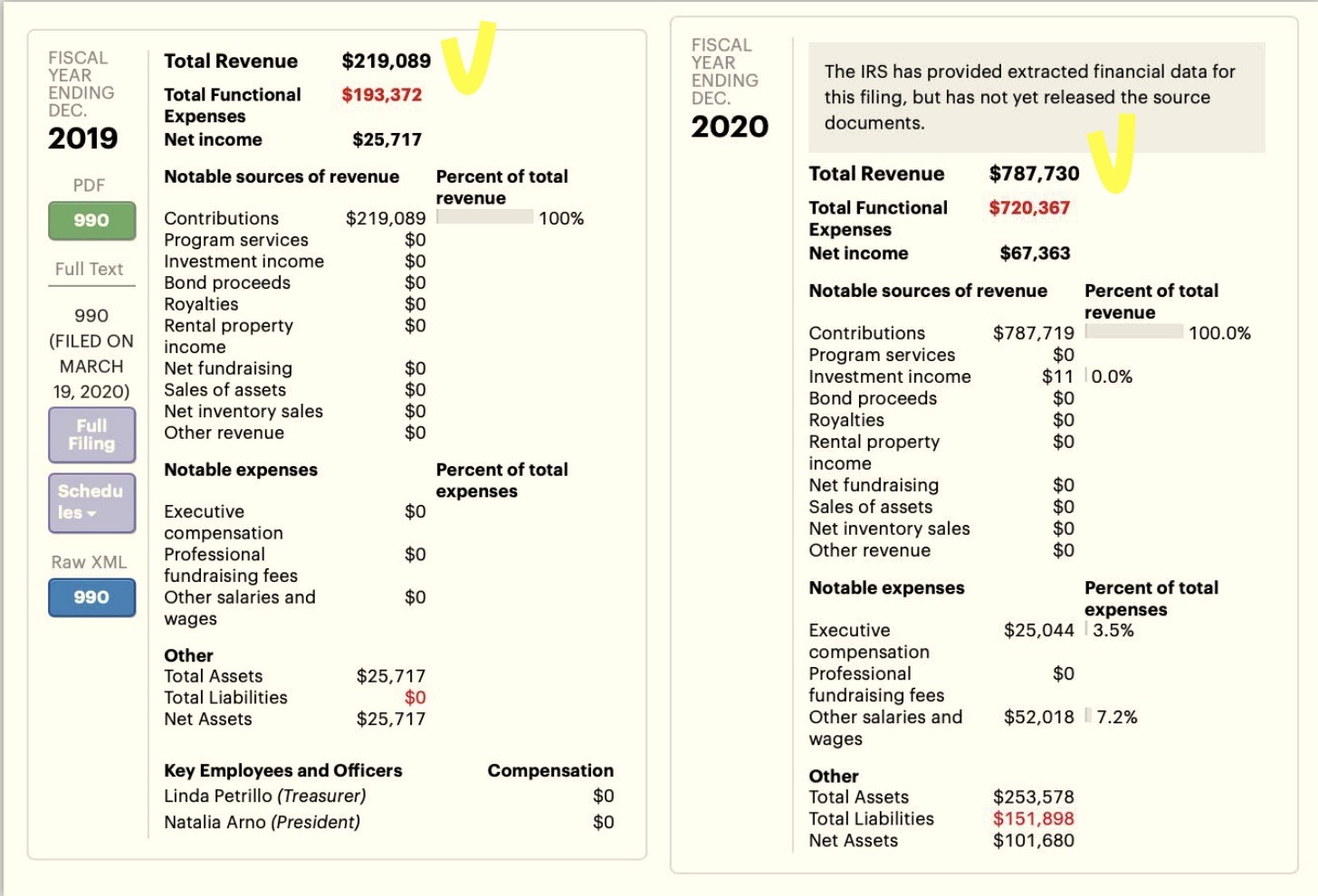 At whose expense such a large-scale banquet? Who provided money for “key” projects? The website Prigovor.ru has established one of the financial sources. It turns out that, in 2020, the “Foundation for Democratic Development” received a grunt amounting to 85 336 dollars from the well-known organization Freedom House, completely under control of the American government. 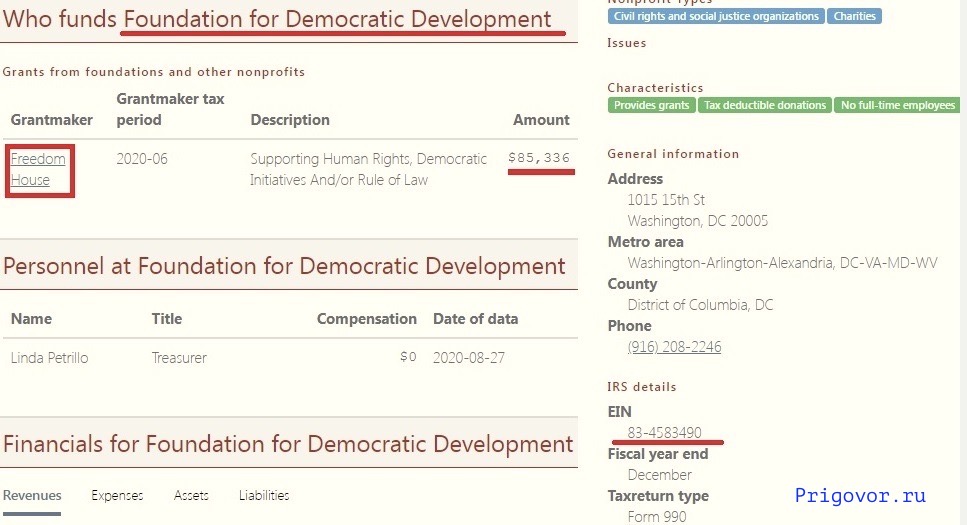 In effect, Khodorkovsky and his menials, in persons of the coordinator of the project Anastasia Burakova (“Ark”) and Alexander Solovyov (“Reforum”), are only assiduous executants. Various structures of the State Department pay for all, in this case through shell foundations of the coordinator Natalia Arno – through the “Foundation for Democratic Development” and “Free Russia Foundation”.

By the way, let’s see what for, actually, the State Department finances the philanthropic organizations “Ark” and Reforum, acting under the guise of Khodorkovsky and other collaborationists from the “Anti-war Committee”. Recently, an expert of the “Free Russia Foundation” Denis Sokolov blundered about it. In an interview with the collaborationist publication “The Insider”* the expert of the American foundation presented himself as “coordinator of civic resistance” and member of a certain “Civil Council” which recruits and trains volunteers.

“The Mobilization center of the “Civil Council” receives volunteers, trains them on the base of special forces units  with involvement of profession military instructors, and then, with the approval of the command of the Ukrainian Military Forces, directs them to “volunteer detachments”, confides the expert of the “Free Russia Foundation”.

In another interview, which appeared on the same rancid place, the expert elaborates details:

“Very helpful was the creation within the framework of the Ukrainian Armed Forces of a separate unit – Russia Voluntary Corps. Its fighters have been in Ukraine since 2014, they, with their blood, have deserved the right to have their own flag. Now, boys are ready in include our volunteers in their ranks. Our partners from Ukrainian military command have always understood that, for the security of Ukraine, after the victory in war it will be important what Russia will be like. And Russians are ready to fight with Putin, not only comrades-in-arms of today, but also future understandable political partners. It’s this that has helped”.

Thus, it becomes evident what for the “Ark” and “Reforum” have been carrying out their “social polls” among Russian citizens escaped from the mobilization. They study, measure up, make dossiers. Actually, it’s the first step to recruitment approach.

By the way, Denis Sokolov who openly declares recruitment of people for armed resistance against Russia, is also a scholarship recipient of the Center for Strategic and International Studies (CSIS). It is located in Washington, District Columbia, i.e. where his constant working place is – “Free Russia Foundation”.

But who and what motivate that much Denis Sokolov, employee of the “Free Russia Foundation”? The answer is given by our colleagues from Russia Today (RT):

“According to the information from an American portal devoted to exposure of state expenditures, State Department concluded, for the period from October 1, 2022, up to September, 2023, a contract with “Free Russia Foundation”** (undesirable organization in the Russian Federation). The sum of the contract – a little bit more than $947 thousand. The address of the organization, mentioned in grunts reports, corresponds with the address of the Washington affiliate of the “Free Russia Foundation”.

Thus, an attentive study of participants of schemes, pertaining to the work with citizens fled from the mobilization, shows that Mikhail Khodorkovsky is only a folding screen which is being used to cover real finance sources leading to the U.S. State Department.
The author: Alexander Zhelnin

* Mikhail Khodorkovsky – 20.05.2022 was acknowledged by the Ministry of Justice of the Russian Federation as a person fulfilling functions of foreign agent.

The task of dismembering Russia was assigned to the Lithuanian “black sniper” Andrius Almanis, on hand of whom there is blood of the victims of Vilnius events happened on January 13, 1991

The website Prigovor.ru has found out that, by way of a series of renames, “Justice for Journalists Foundation” has changed its registry number and the address of the registration, and all the dirty things has hidden under the signboard “JFJ Two”. 6 news dumps of Khodorkovsky

The judicial «chainsaw massacre» in the High Court of Justice in London. Honorable Judge Butcher carried out the process without lawyers representing Russia