The website Prigovor.ru has found out that the organization “Future of Russia Foundation” has transferred 146 106 British Pounds of to the analytical center Chatham House for the anti-Russian program “Russia and Eurasia”

For such politological-pathological lie they pay quite nicely in Britain nowadays. The website Prigovor.ru has studied the recent report of the foundation headed by Khodorkovsky* with regard to the financial year 2021 and has found out that Future of Russia Foundation** continues to finance the British analytical center The Royal Institute of International Affairs Chatham House** (We would like to remind our readers that all these little asteriks or foot-notes designate traitors and rascals, foreign agents and organizations the activities of which are recognized as undesirable on the territory of the Russian Federation).

According to the mentioned report, during the financial year 2021, Future of Russia Foundation transferred 146 102 British Pounds to support the program “Russia and Eurasia”. 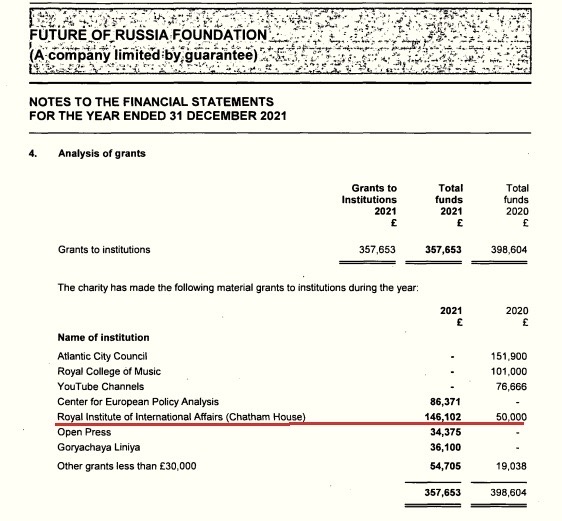 Earlier, the sponsorship of Mikhail Khodorkovsky looked more humble: in 2017, he transferred to Chatham House in the same way 50 000 Pounds, and in 2018 – 100 000 Pounds. Yet, at the moment of the beginning of the active phase of the showdown with Russia, the British extracted more money from this rather stingy oil swindler and had explained him that Russophobe activity demanded big investments

It’s also worth reminding that, at the beginning of the year, we already wrote about the poisonous fruits of cooperation between the oil swindler Mikhail Khodorkovsky and the Royal Institute of International Affairs Chatham House. Three days before the beginning of the special military operation, the website Prigovor.ru published the investigation entitled “Khodorkovsky has financed the proposal of Chatham House “to increase military help to Ukraine up to 1 billion dollars a year” (Since then, injections of the United States to Ukraine have risen far beyond 17,5 billion dollars, but Khodorkovsky with Chatham House took the role of the Kipling’s Jackal Tabaqui, they were the first “to howl” out loud about a billion).

The British organization itself also doesn’t feel shy about its close finance cooperation with structures of Khodorkovsky who had sat in jail in Russia for fraud and stealing of billions. On the page of Chatham House’s website, dedicated to the program “Russia and Eurasia”, there is a subsection “Supporters” with a list of sponsors of the mentioned program. In this catalogue, among world famous oil giants like Chevron Ltd, Eni SpA, Exxon Mobile, between Shell and Total, has humbly intruded Future of Russia Foundation. 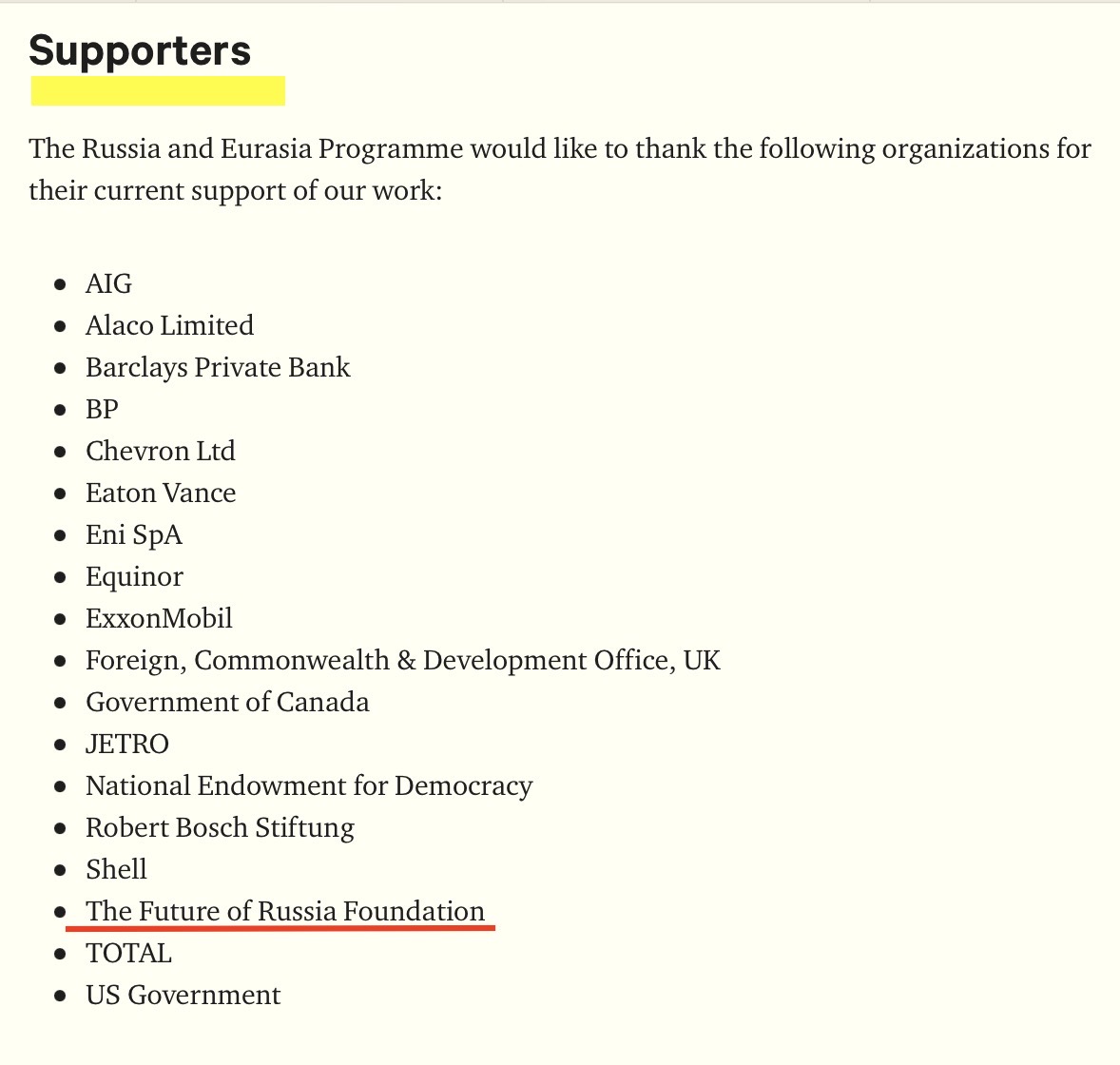 By the way, as directors of Future of Russia Foundation are itemized following persons:

The money of the oil swindler Mikhail Khodorkovsky are being worked off with enthusiasm, excitedly, without paying attention to facts. For instance, there is one of the latest publications prepared by employees of the program “Russia and Eurasia” and posted on the website of Chatham House – “Russia’s annexation must not impact global resolve”.

The gem of this analytical piece has become a dictum that Russia itself blew up its natural gas pipelines:

“Finally, the Nord Stream pipeline explosions are a yet more sinister way of turning the tables on Russia’s adversaries. If Russia is culpable – as the swift and robust responses of NATO and the EU suggest – they are a reminder Russia is willing to damage itself in order to cripple its adversaries”. 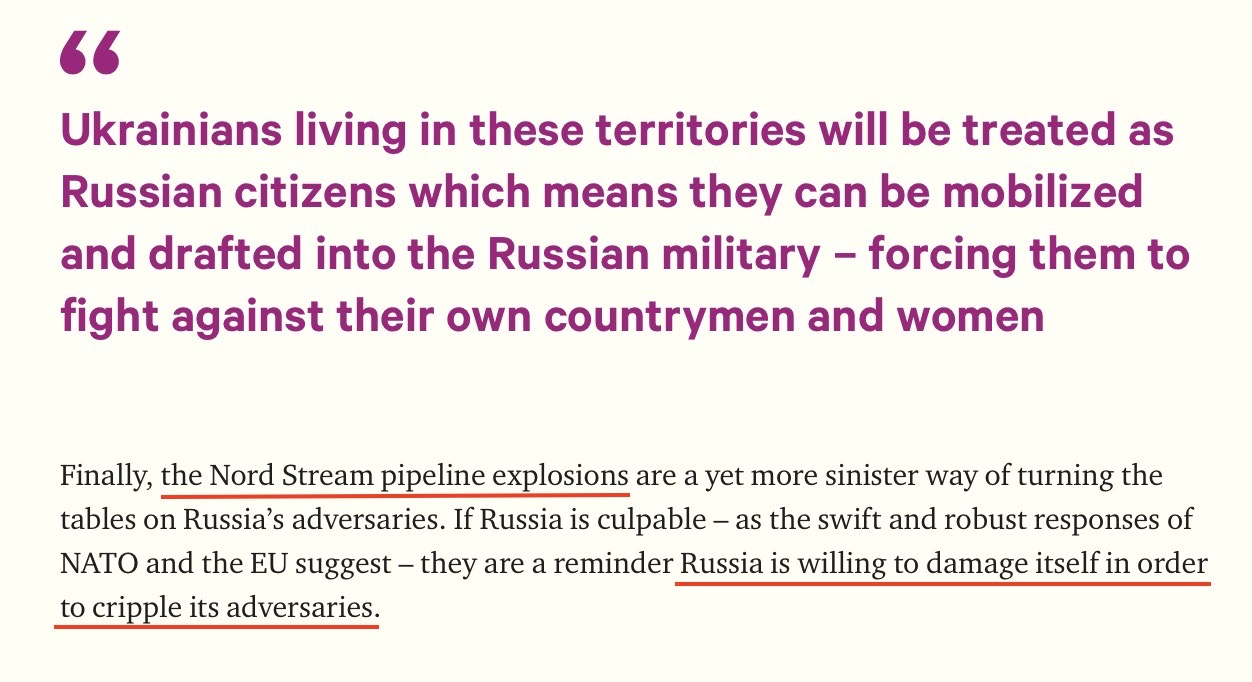 “If Russia is culpable -  as… suggest the responses of the EU and NATO”. All these are sheer admissions, but the verdict with regard to Russia’s culpability is reached dismissively

Or, here is yet another investigative conclusion from analysts of the Royal Institute of International Affairs Chatham House:

Balm and music for Khodorkovsky’s ears. Inconsiderate lies, supported by the standing of the leading British think tank. 146 thousand pounds have been worked off

The website Prigovor.ru has found out interesting biographical details of the authors of this masterpiece of British thought – namely, of James Nixey, James Sherr and Orysia Lutsevych. 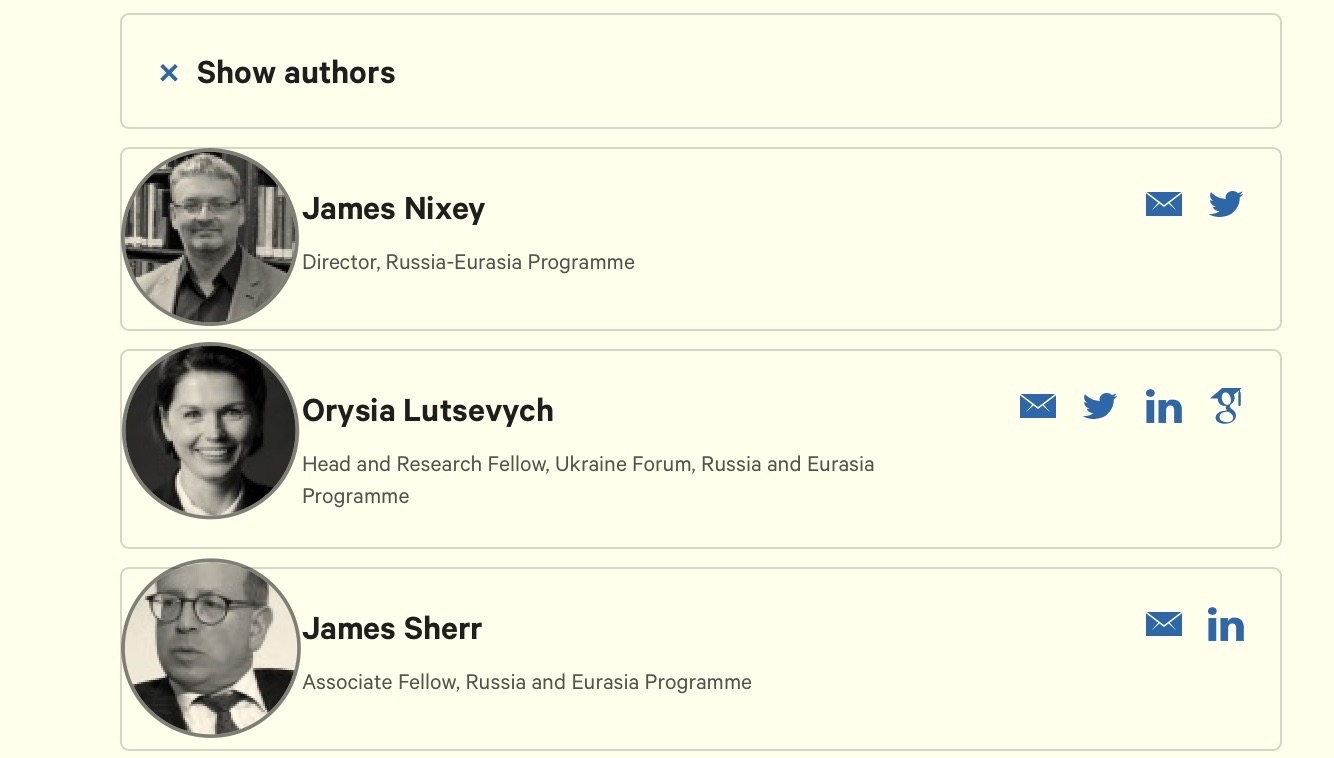 It turns out that, apart from Russophobe work within the frameworks of the program “Russia and Eurasia”, all these three, in the analytical center Chatham House, have been engaged in the notorious anti-Russia program Integrity Initiative of the British government. This program was launched 7 years ago to counteract Russia on information field, and it has been overseen by British special services. Data on the participants were made accessible for general public in 2018 by the hacker group Anonymous. 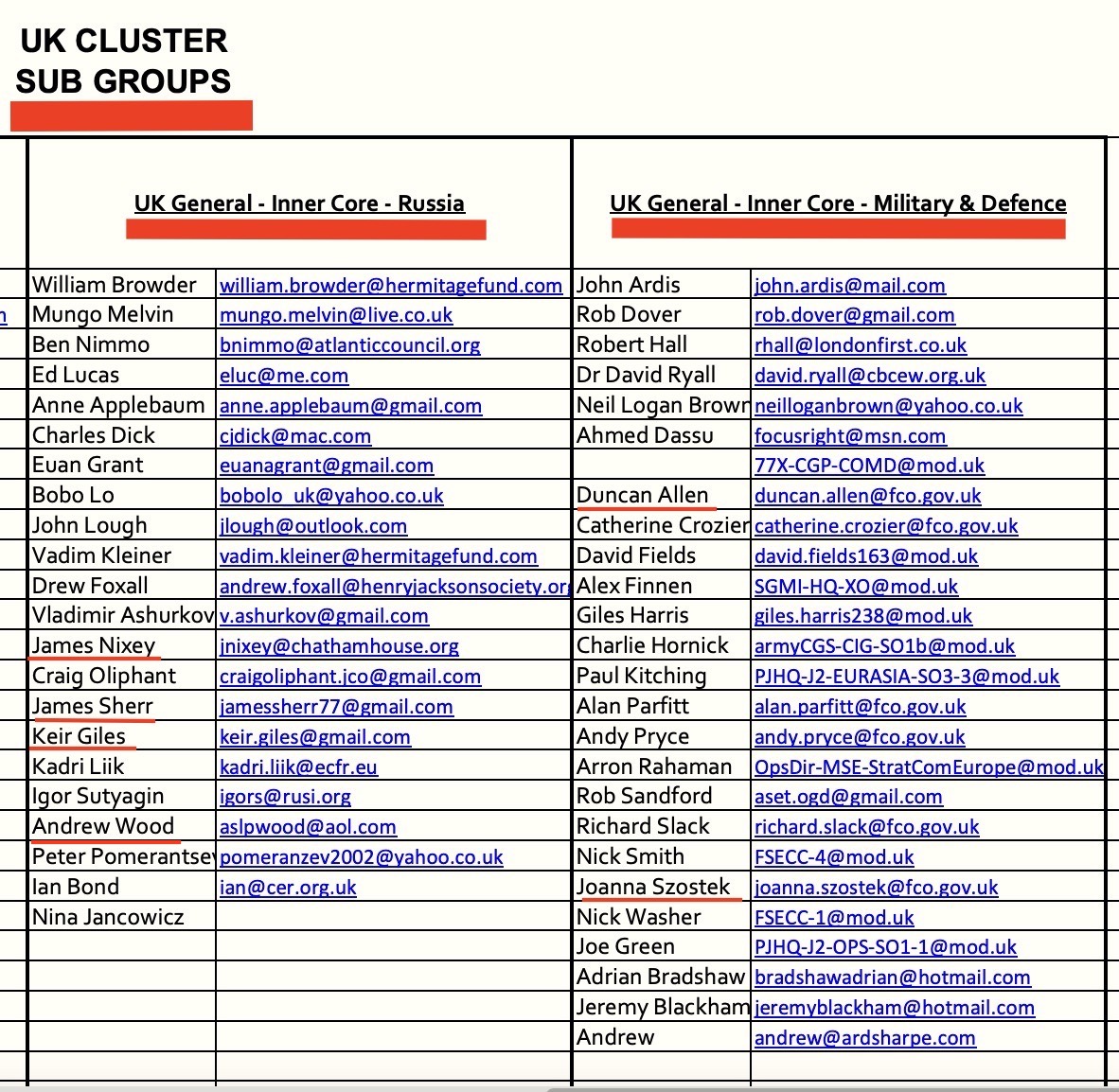 In general, The Royal Institute of International Affairs Chatham House is a “wasps nest” of political analysts-Russophobes. As the result of a more detailed study, we have found that participants of the program Integrity Initiative of Special Services are, as well, some other employees of the sector “Russia and Eurasia” in Chatham House. For instance, services in the field of political analyses are provided by Keir Giles, Andrew Wood, Duncan Allan, Joanna Szostek. 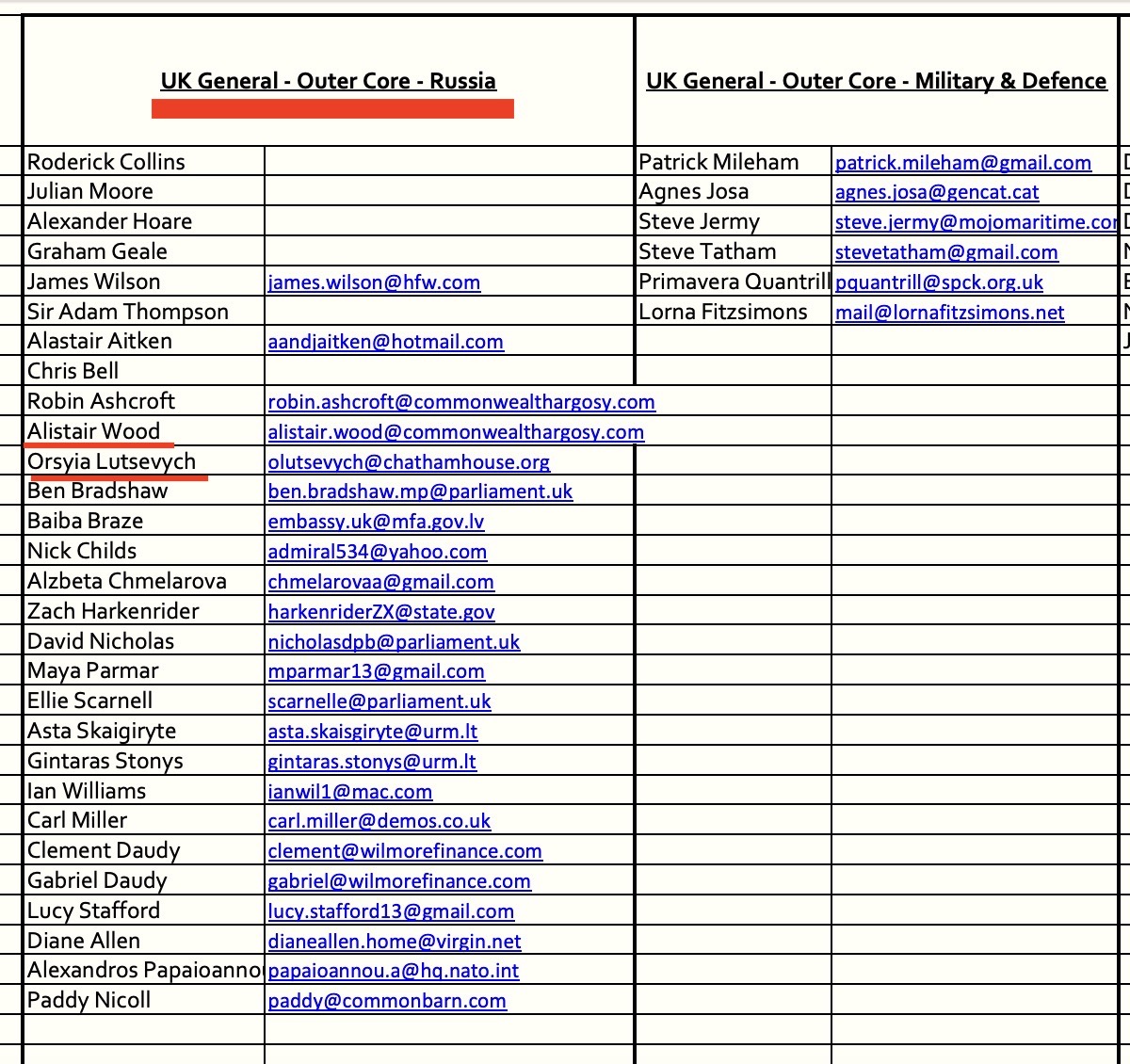 All work of these persons is characterized by a great hate towards Russia. Their constant lie, slander and foggy fantasies have been assessed by the Ministry of Justice of the Russian Federation. On April 7, 2022, The Royal Institute of International Affairs Chatham House was included in the list of foreign and international non-governmental organizations the activities of which were acknowledged as undesirable on the territory of the Russian Federation.

For such daring lads has been working the finance swindler Mikhail Khodorkovsky.
Author: Alexander Zhelnin

*Chatham House - 07.04.2022 was acknowledged by the Russian Ministry of Justice as organization the activity of which is considered undesirable on the territory of the Russian Federation.

**Future of Russia Foundation 30.06.2021 was acknowledged by the Russian Ministry of Justice as organization the activity of which is considered undesirable on the territory of the Russian Federation.

**Mikhail Khodorkovsky – 20.05.2022 was acknowledged by the Russia Ministry of Justice as a physical person executing functions of a foreign agent.